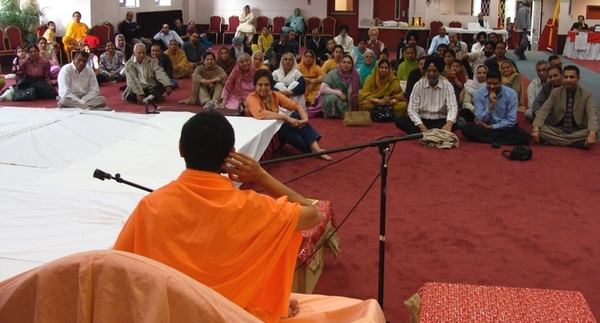 21 June, Surrey. A greta number of aspirants from all the nearby towns had reached Vedic Hindu Society Temple of Surrey much before time to listen to Swami Suryendu Puri Ji. It was monday, the day devoted to Lord Shiva and so the event was started after Shiva-Abishek here. Even though the Sun was covered with the clouds people were very curious to learn about Surya Kriya as they had already learnt much about its marvellous effects on radio. Swami Ji told to them about the life giving property of the Sun and also taught them a safe method to connect to the Sun so that they could gain a good and complete health. Considering the fact that in Vancouver region Sun appears for very short time, Swami Ji told to them that if they can make Surya Kriya in summers as many days as they have the Sun then later on it would be possible to assimilate light from fire or a butter lamp too. By regularly doing Sun Meditation in proper fashion their inner channel will be activated and then it will be easy for them to absorb light rays even from such a weak source.