Surya Kriya in the City of daring and devotion

Mar 22-24, Chittorgarh. The historical city equally famous for its soldiers and saints, learnt to add more to its strength in form of Sun. It was the first camp of Siddhmrita Surya Kriya Yog in town, organized by Sarvodaya Sadhna Sangh and Meera Smriti Sansthan. Though the city is well aware of yoga & natural lifestyle and so many organizations and societies are working towards its dissemination, yet after Surya Kriya they admitted that it was an extraordinary experience. One of the organizers Mr. Sisodiya who himself is a Yoga Instructor and Naturopath and maintaining a very active life at the age of 84 said, “I’ve personally conducted and organized innumerable health and yoga camp yet it was something phenomenal.”

Being an open camp, people from all walks of life participated in the camp. A great number of intellectuals and practitioners also took part in the event. All the participants were fascinated by the simplicity and power of Surya Kriya. They shared so many experiences about improvements in their appetite and sleep pattern, improvement in their eye-sight, increase in physical energy and mental calm, release from different pain and tensions and much more. In fact, the response of the very first sitting was such overwhelming that the organizers had to instantly arrange for evening sessions also which was not scheduled earlier. 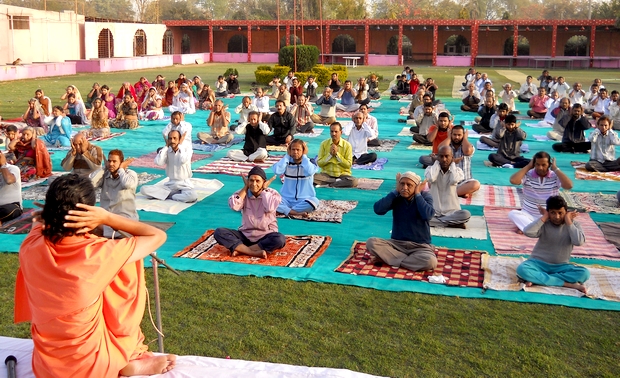 Swami Suryendu Puri conducted the camp in his typical style, full of fun and learning. In addition to Surya Kriya he also shared parts of Sanjivani Kriya and various Sukhsma Kriyas also. He also informed them about correct methods of breathing, food, sleep and of course about meditation.