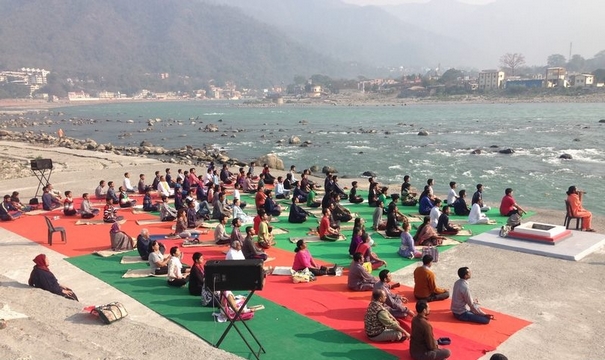 March 1-3, International Yoga Festival, Rishikesh: Swami Suryendu Puri Ji and Surya Kriya Yoga have always been one of the most popular and sought after entrants at the International Yoga Festival that has been organized by GMVN and Uttarakhand Tourism Dept. for the past four years, at Rishikesh. Despite Swamiji’s hectic schedule back at the ashram, he could not put down the compelling calls of the organizers of the festival, and consented to participate, though only for 3 days, since he had to return to conduct the Shivratri Camp from the 4th at the ashram.

Surya Kriya was conducted, as always, on the pristine Chhat Ghat besides the Swaminarayan Ashram. Hearing of Swamiji’s presence, many locals who know him well now, rushed in to participate. Both, the first-timers and the regular participants enjoyed the sun, the mantras, the mudras, the laughing and the crying, midst the gentle whispers of the Ganges in the Surya Kriya sessions.

Many participants, especially youngsters and mostly graduates in Yoga, from the Surya Kriya sessions held at IYF make it a point to visit the ashram and spend more quality time with Swamiji. Newer and newer faces can be seen at every Sadhana Camp organized in the ashram, which is the result of Swamiji’s travels and participation in such festivals.