19th July, Canada. The topic was “Expanding life through breath”. It was attended by the Staff faculty in Stroke Neurology, Rehabilitation team, Research fellows, Research nurses and Members from Spiritual committee of Foothills hospital. The event was presided over by Dr Andrew Demchuk (The Director of Calgary Stroke Program). It was actually a highly anticipated talk, since the staff had shown quite an interest in learning about the Science of breathing. And Swamiji was at his best in delivering this talk. 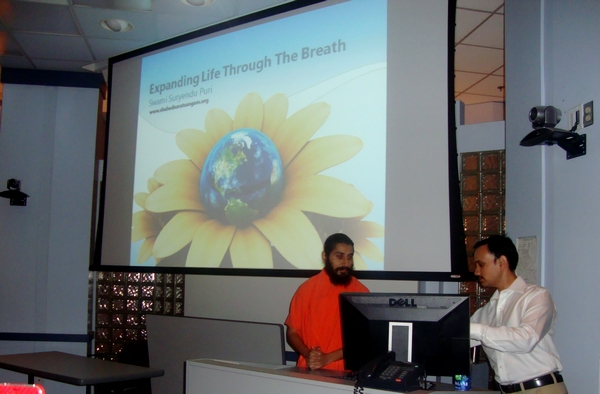 He started with emphasis on child’s breath. Gave a justified comparison with an adult breath and how is it different. According to him, a child breathes completely while an adult often has an incomplete breath. A child’s breath is fast, rhythmic and regular with a clear sound. With each breath, almost the entire body of the child expands. It is deep and penetrating and graceful. This breath characteristic is primarily because the prime focus of a child is within one’s self. The senses of a child are all directed within. But with the passage of time, as more and more senses are directed outwards, the breath loses its properties and in the adulthood, almost everyone is unaware of his or her breath. It progressively becomes shallow, irregular and superficial. It lacks the deep and expanding quality. Somehow there develops a disconnect between the breathing pattern and awareness to it. As a result an adult uses approximately 10% of his lung capacity which is 5000 cc. This forms the basis of many disorders that one experiences in adulthood.

He then practically demonstrated the way to breathe completely. The audience was extremely appreciative of it. He demonstrated how one should breathe so that one expands the shoulder, chest and abdomen in each direction, upwards, downwards, front and back and on the sides. Initially one will have to put in efforts to sustain this breathing pattern and train the mind accordingly but with regular practice it would come naturally and we can be more aware of our breathing.

He also touched the topic of two energy systems in our body, viz. the brain and the belly (second brain). He went on to discuss the importance of the navel centre, which has something unique about it. As it is well known that a child while in the womb and during development, gets its nourishment through an umbilical cord which is attached at the navel. After birth, this cord is detached and navel centre gradually becomes dormant and the entire existence is taken over by our senses in an outward direction. He highlighted the significance of breathing completely by expanding the abdomen and in turn stimulating the navel center, which would also help curtail obesity, which is supposed to be the root cause of many disorders.

He then talked about the importance of two nostrils in human beings and the audience was quite surprised to learn this aspect of spiritual science. According to Swamiji, there is a special role of each nostril from spiritual perspective. The left nostril is connected to the brain and the right nostril is connected to the gut or the navel centre. Only one nostril is active at one time and the activity rotates on each side at an interval of one hour in a cyclical manner. The left nostril is linked to the thinking activity of brain while the right one is linked to the physical activity and hunger. He also conveyed that by changing the activity in the nostril, one can change the activity in the brain and the gut. For ex. While thinking, drinking and urinating one should try and use the left nostril whereas while one should use the right nostril for eating, sleeping and bowel cleaning. This concept came as a surprise to the audience and we could see the enthusiasm among the people to try this and experience the changes that would happen.

Swamiji also discussed about a case in India, where a lady suffered from a brain stroke and remained unconscious for more than 48 hours and doctors couldn’t figure out any particular means to improve the level of consciousness. However when the activity of the nostril was looked into in this patient, it was discovered that the right nostril was active almost all throughout. A particular kriya was adopted to change the nostril activity to the left, which was achieved within 48 hours and the lady showed remarkable improvement in the level of consciousness and ultimately went on to recover substantially  from the stroke and in short span of time. This case basically highlighted the importance of nostrils in governing the brain activity and probably some effect on intracranial (brain) pressure as well. Finally, Swamiji concluded by providing some take home messages which stressed the significance of complete breathing pattern and nostril activity.

The audience appreciated the talk and it was received with a vote of thanks. The spiritual committee staff inquired about whether we have any article or book published on the breathing practices that were discussed during the talk and they were assured that we would soon get them this data. Few members also expressed the desire to listen more about this and found that the stipulated one hour was less of a time and couldn’t meet the need of the importance of this subject.