T.S.P. Foundation Work against the Backdrop of G.P.

12th July 2011, From the Flushing Lawns of SSS Ashram: Almost a week back the newest fleet of workers arrived. As they finally began to live in their little dwellings, along with their wives and children, it seemed as if a new basti had sprung up within the ashram. Meanwhile, the storehouse for storing raw materials was also completed, and thereafter the work began in full swing.

Within 3 days, the once plain, smooth piece of land has turned into a stretch of crests and troughs, hills and valleys as the giant mound tiller works throughout the day to dig the earth to the depths of near 7 feet, as the foundation has been planned after testing the composition of soil for stress and strength. Alongside, anti-termite solutions were poured into the pits. Over that, a 6-inch thick layer of concrete is being laid. Once this phase of the work is completed, 24 columns would be raised from these depths, over which a ring beam would be laid to support the weight of the entire structure. It would be of course our endeavour to go on reporting continuously as the various milestones are reached. 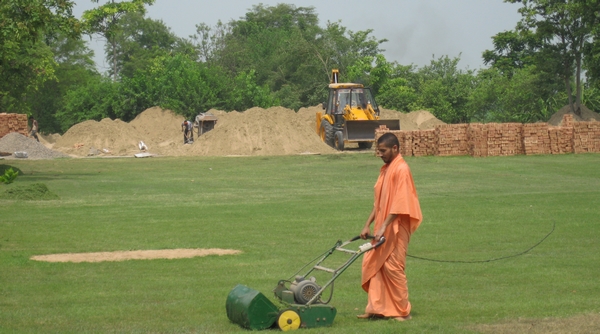 Swami Suryendu Puri Ji readies the lawn for Guru Purnima; in the backdrop stand the little hills and valleys as the foundation work gains momentum.

Meanwhile, there is plenty of external activity in the otherwise still atmosphere of the ashram, to ready the ashram for Guru Purnima. Yesterday, the inmates of the ashram and the local devotees from Malke village cleaned and readied near 50 en suite rooms, besides the various large halls for a pleasant, comfortable stay of all the devotees visiting on the 14th and 15th of July. Everyone kept their tiredness, heat and sweat at bay to spend the entire day thus. In the evening, their services throughout the day were blessed with the company of Maharaj Ji, when He emerged from His room and sat for near an hour with the devotees. “Vairagya” was one word that remained the cornerstone of His message. “Vairagya” implies to have a one-pointed, razor-sharp yearning and focus on the goal of attaining the Divine, so much that the entire world becomes non-existent in the shine of this focus, and if it exists it should be for the sake of attaining that goal. A superb day that was mingled with Sewa and Satsang thus concluded. 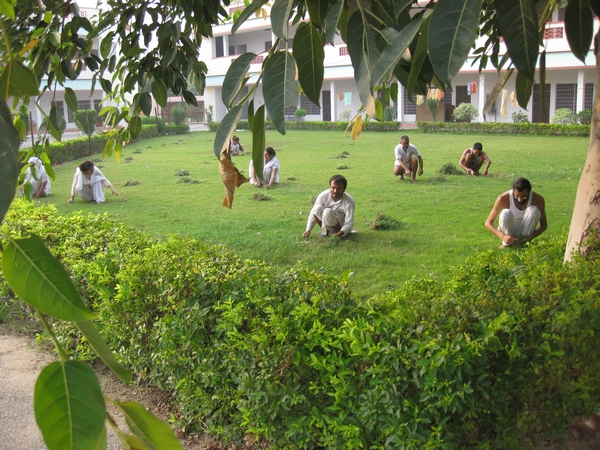