Dusshera Meditation Camp (18-21 October, 2010, SSS Ashram): The conch shell resounded in the dark of the dawn, summoning all to drink deep the nectar that resides within every individual; and which has also been our one search since eternity. Hundred odd aspirants aged between 12 and  82; some diseased others not so, but all in the pursuit of welcoming greater joy into their lives, seated themselves closed eyed in the meditation hall, awaiting the arrival of the One who would show them the path to the Garden of Bliss within. Maharaj Ji arrived, bowed to the gathering and taking his seat, chanted OM. The journey was on…

For three days, the participants learnt the secret of driving the chariot of ‘Naam’ (the sacred mantra) on the path of breath. This science included everything: from learning to stand, sit and breathing completely. Every dawn, Maharaj Ji would become the torchbearer, leading the participants within. Breathing completely, chanting deeply, crying feelingly and dancing joyously under his guidance, the participants would take their steps on the goal to merge their small individualities into the Ultimate Wisdom-Truth-Bliss. The efforts made herein were given a further impetus at the SSKYoga session which followed next.

After a light breakfast, all would gather for the question-answer session with Maharaj Ji. Varied though the questions are, the answer is the same –Maharaj Ji said on the first day. This answer is to plunge deep within one’s being and discover that all that one has been seeking is to be found there. Our treasure lies buried within our own selves. This path of discovery takes one literally within this body. The breath is turned inwards. The senses which can today perceive only the external world are turned within and begin to perceive inner sights, sounds, smells etc. Purification of the mind forms the base of this inward journey and is achieved through selfless service. ‘Not me, but You, O Lord’ was the succinct sutra handed down by Maharaj Ji to the aspirants. 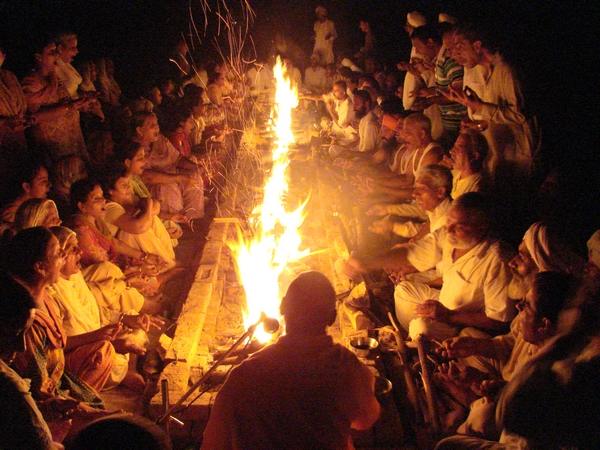 Maintaining the continuity, the participants would gather for another session of SSKYoga, late afternoon. Later, as darkness would envelope the external world, Maharaj Ji would guide the aspirants into the ever-shinning inner world. The daily round of practices would be concluded with a power-boosting session on Agni Kriya Yoga and a very light supper.

And it was as if the three days were merely a preparation for the climax reached on day four. The willing participants were asked to sit non-stop in meditation for twelve hours: subsisting only on a glass of herbal drink and ‘lassi’. Many participants, unaccustomed to sit even for half an hour at their homes had doubts on making it through. Others doubted if they could go without eating anything throughout the day. Anyways, all mustered their courage and surrendered themselves to Maharaj Ji who would be present throughout with them. And in the end, everyone was surprised by the final outcome. All traces of hunger and fatigue of long-sitting evaporated into thin air under the surge of the vibrations of ‘Naam’. Every now and then, Maharaj Ji would break into a musical composition which would engulf the hearts of all ending in a surge of emotions and divine ecstasy. In this manner, the camp served its purpose of charging up the spiritual lives of the devotees who took their leave, lightened, refreshed and smiling.