April 13, 2013. Kila Raipur. Vaisakhi is a festival full of joy and dance and is celebrated widely in the plains of Punjab. It also coincides with the birth anniversary of Kambli Wale Sri S­­wami Dev Puri Ji Maharaj. Thus, for Kila Raipur and adjoining villages and the practitioners of this tradition, it is always a double reason to celebrate. Maharaj Ji (Swami Buddh Puri Ji) also reached Kila Raipur on this occasion, where he spoke on the meaning of being initiated in the tradition of Kambli Wale or any spiritual tradition for that matter and the way of sadhana for a grihasthi. Salient points from the discourse have been given below:

Maharaj Ji began by mentioning the gist of what each of the speakers prior to him had said. Swami Suraj Puri Ji of Harisar Ashram had narrated an incident in which someone aggrieved by the death of his son, was on his way to commit suicide. But meeting Kambli Wale on the way his grief left him and he became a changed man. Maharaj Ji said that this incident spoke volumes about the personality of Kambli Wale. Sadhvi Yoganjali Chaitanya described the immense compassion inherent in Kambli Wale that would include even those who had physically hurt him or slandered him. Swami Suryendu Puri Ji questioned about what it meant to be initiated in the tradition of Kambli Wale and also why, those who proclaimed themselves as disciples of this tradition, also have another side to their lives in which they build walls between themselves and the Guru; in which the stream of sadhana gradually thins and dries up as it trickles down from one generation to another! Maharaj Ji said, this issue raised by Swamiji was really important and worthy of deep thought. 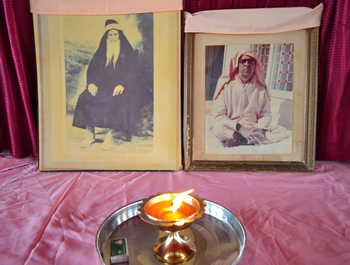 Maharaj Ji said that the reason for any gap between the Guru and the disciple is when the disciple fails to understand the Guru and the stream of sadhana flowing through the Guru; considers the Guru to be just an embodied being just like Himself; misses to dive in the vast pool of love in the Guru’s heart. The tradition of Kambli Wale originates from Brahma and flowing down through Vasistha, Vyasa, Shuka, Shankaracharya et. al. has reached us. But more important than the names of the saints is the stream of sadhana which flows through them. The same stream of the Name (Naam) in which Kambli Wale took the plunge is available to us as well. But, what to say about someone who is content to sit just on the shore, puff-in only sand and play with pebbles. Such ones as these have built a wall of ego around themselves and the Guru.

The Name given by the Guru is an explosive filled within a disciple by the Guru. When it gets the spark of an aspirant’s loving and dedicated practice it explodes and all limited body-consciousness of the aspirant is shattered to pieces. But, those who live encaged in their egos will miss this explosion. 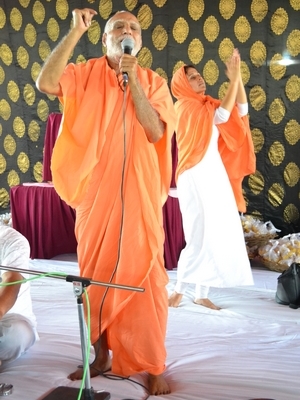 Maharaj Ji further said that the most difficult thing is to practice and conduct oneself as per the command of the Guru. Difficult though it is but it is also extremely effective. Because the command of the Guru is always meant to shatter the limited identity with which the disciple identifies himself. If one can dissolve one’s mind in the Hukum (Divine Will), then the Divine Feminine (Shakti) within awakens, rises and meets the Divine Masculine (Shiva). Then the aspirant becomes a Maha-Purusha.

Even for the common household practitioners, who are initiated, regular practice of the Name is stressed. Maharaj Ji said that ideally one should practice for 2-3 hours. But even if someone practices for an hour daily, with full dedication and love, filling the vibrations of the Name within, listening to them deeply and breathing deeply, many things would happen within him. The test of his practice is that a state should arise within him, a blissfulness should happen to him, so that he eventually feels that an hour is too less a time to practice. In this way, the duration and intensity of the practice should go on increasing.

Along with this, Maharaj Ji said, it is really important for a grihasthi to understand the lesson of living with love with everyone. These lessons are to be first learnt by giving up selfish tendencies in the relation of a husband and wife. The mutual love of Ram and Sita is the final frontier of love between husband and wife, in which the wife becomes the husband’s shakti and the husband also dissolves his personality in her. Further, the life and decisions of Ram and Sita were not only limited to themselves, but also included the well-being of the entire society. As a result, at the end of their stay on earth, not just humans but also animals reached new levels of evolution.

If, while living in grihastha there are differences and tensions with one’s parents and one’s children then the basic cause of all these troubles can be searched in the quality of the relation between a husband and a wife. The gap that exists is one of ego, of selfishness. It can be dissolved by entering into a guru-tradition. Living in this way, the husband and wife becoming one, shakti will awaken within, and only then will we truly become disciples in the guru-tradition.