The ‘Red’ Colour of Holi 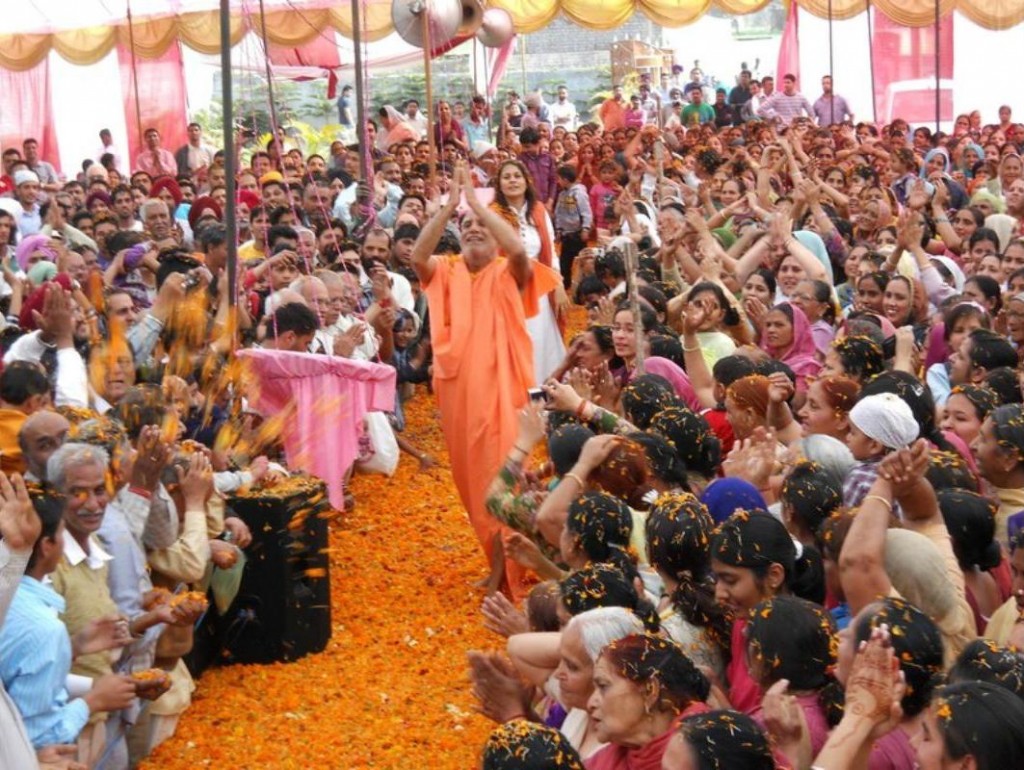 8 March, 2012:  “Holi with Flowers” was added to the list of annual activities of the ashram in the year 2009. It had been more than a decade since the devotees of Chandigarh built an ashram there (in Maloyaa); the sole objective of which was to provide a platform to local aspirants where they could gather and share their practice or experiences. Earlier, Maharaj Ji used to visit there many times every year but since 2005 it was almost stopped due to his increasing love for solitude and inner research. Due to his absence even the localites gradually lost the interest in visiting this ashram and preferred paying visit to Malke Ashram instead. Seeing this beautiful place being wasted the trustees of requested Maharaj Ji for some time and finally the day of Holi was granted to them. On the eve of Holi,  Agni Kriya is performed making a huge fire in which devotees particiapte in great number. Next morning, the satsanga starts with devotional songs followed by the discourses from Sadhvi Ji, Swami Ji and Maharaj Ji. Another round of divine music starts afterwards with Maharaj Ji in which he not only spreads waves of love and devotion but also showers beautiful flowers on the devotees. The whole atmosphere becomes charged with love and emotions, people singing and dancing under this colorful and fragrant shower. The limit of words can never explain the divine experience of this occasion, it can only be felt and enjoyed.

For those who gathered on March 8, 2012 it was an experience of a lifetime. Though the outer activities may look similar year to year, yet it is the mind that absorbs the experience, and therefore the experiences are always different and can never be repeated. Maharaj Ji in his discourse very clearly distinguished ananda (spirtual bliss) from ordinary happiness that we all experience. Our happiness in invariably limited by sorrow, which follows it  like a shadow, for happiness and sorrow are the two sides of the same coin. On the other hand, ananda is untainted, unblemished and ever increasing.  However, those who are desirous to attain this state of perennial and incomparable bliss must also first burn themselves in the ‘red’ fire of sacrifice. This sacrifice is to be of oneself, one’s ego, one’s selfishness. The fire of sacrifice burns all the impurities and what remains thereafter is God or ananda. Or, one must be prepared to be crushed like the sugar-cane in the mill. When it is crushed all its rigidity disappears but simultaneously rasa or juice also effuses from it. Similarly, by being tranquil amongst sorrow and happiness, praise and criticism, victory and defeat, one’s egotistical rigidity gets crushed and simultaneously ananda begins to emanate.

However, Maharaj Ji commented that though we understand this, yet we retrace our steps when the going gets difficult. The reason for that is lack of power and energy. The requisite energy is gained through love. Only he/she can bear the fire of sacrifice, who clothes himself in the cool attire of love. A mother can undergo immense agony because she loves her child, even though this love be of this world. Maharaj Ji added that even though one may not be able to love, still simple attachment can do the work too; provided this attachment (raaga) is not accompanied by aversion (dvesha) against anyone.  In time, such attachment to one’s parents, children, husband, wife etc. will transform into love. The grandness of sacrifice was exemplified by the story of Yudhistra from Mahabharata, where he sacrificed even the comforts of heaven for the sake of a dog that had accompanied him to the peak of Svargaarohan in the Himalayas.

A detailed English transcript and the Punjabi audio of the discourse would be updated on the website shortly. More pictures from Holi 2012 can be found in the photo gallery.