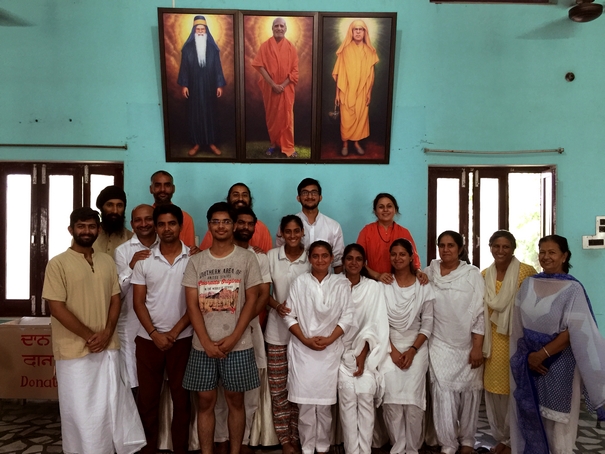 May 28-June 8, 2016: Last year, in December, a new and interesting initiative to learn Sanskrit was taken up in the ashram. The idea is that the practitioners, especially the ashram residents, should become well-versed in this language which has the most in-depth spiritual writings. Furthermore, it is Swamiji’s wish that Sanskrit should become the medium of communication in the ashram (well don’t worry! This applies strictly to permanent ashram residents only, but the sanskrit sounds are so good that even the guests will invariably pick up a few words during their stay in the ashram).

So with this in mind, long time devotee Jyotiprakash Verma from Delhi had brought along his colleagues Shri Ratish and Shri Ajit – both of whom teach Sanskrit at Hans Raj College, Delhi University. That camp was so well appreciated, especially for its teaching, that Swamiji invited them again during their summer vacations. So Shri Ajit spent two weeks in the ashram now, continuing further from where he had left of in December. Again, the camp was truly enjoyable and Sanskrit is slowly strengthening its roots in the ashram. So don’t be surprised when next time you visit the ashram and someone greets you, “Bhavaan/Bhavati Katham Asti?” (How are you?). Rather, you can surprise them back by answering, “Aham, Samyak Asmi” (I am well.). Namo Namah to you for now. Punah Milamah (See you soon) with another update.