“What is God?” Discourse at Ramgarh Sardara

Br. Guru Chaitanya’s message on the occasion was full of a deep sense of spirit of attachment to the great purpose of life. Quoting from Rehras Sahib (the soulful hymn from Guru Granth Sahib),

which implies, ‘You have obtained this human body, it is your means to meet the Lord. The other affairs are of no use to you. Meet the Holy Congregation of saints and only recite the name of the Lord.’

But this name is not to be found everywhere. The Gurbani also says,

i.e. the name of the Lord is the pearl of happiness, bliss, and nectar. It rests in the minds of the devotees of the Lord.

Sadhwi Yoganjali carried on from there. She asked the audience of their real abode. This body changes constantly. The child’s body changed and there stood an adult which then waned and old age set in. Then the body was consumed by the death. But through all this the sense of ‘I’ was the same. The real abode of the ‘I’ is the Dasham Dwara (or the tenth door). The key to open it and rest in that permanent abode is the recitation of Guru mantra, with breath, as disclosed by the Guru.

She also said, that when someone working for Rs. 10,000 a month, gets a job offer for Rs. 100,000 a month, he does not hesitates even for a second to hold on to the offer. That is so because he realizes the importance of money. Similarly, if we realize the great importance of Lord, and attaching ourselves to his feet, how can we even miss one practice session of remembering Him. Further on, how can we forget Him even for a moment. For the Lord is the very basis of life. 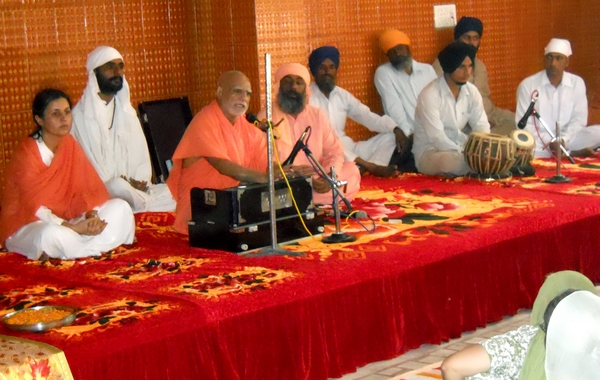 After that Maharaj Ji addressed the gathering. The speech is presented in a bulleted form, highlighting the salient points:

“Simar simar simar sukh paavo, kala kalesh tan maahe mitaavo”. Happiness – through which all turmoil of the body and mind is erased, ceases to be.