Dussehra – The battle against ego

11 October, Shabad Surati Sangam Ashram, Malke, Moga: It was the event of Dussehra (also commonly known as Vijay dashmi) and the second anniversary of Tripur Shiva Peetham – the Meditation temple.  Sadhvi Ji acquainted us with what’s and why’s of Navratras, celebrating Dussehra, and its significance for His seeker. Following to her talk, Swami Ji insisted on understanding that this body is more of a base and not the entirety. And the technique to perceive that entirety is what we’ll have some light on! 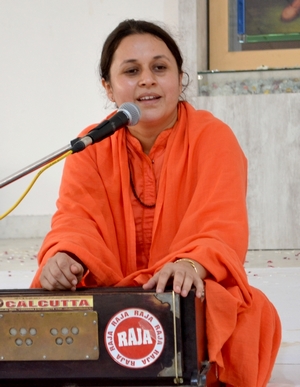 Tripur Shiva Peetham provides us a sturdy platform offering both power and resources. One who has justly proved his eligibility gets to claim his right to run on this track of truth and goodwill. And therefore, amongst all the other sadhanas existing in the world, Shree Yantra’s sadhana is unique in terms of what it has to offer –both liberation and materialistic desires under one roof. But, it must not be mistaken to be as easy as bowing a head in front of an idol. To win, we must fight the battle of Sadhana.

In Ramayana, before the battle that was to take place in between Lord Rama and the King of demons, Ravana; Rama did Navchandi yajna, i.e prayed to the nine forms of mother Shiva. It is since then devotees adopted this practice of sadhana that goes on for nine consecutive days and nights, fondly called as Navratras. The significance of the number of days involved to be nine is that during these nine days one tries to turn the pranic flow and thus, the mind within through 9 gates of the body (two eyes, two ears, two nostrils, the mouth, the genitals, and the anus), which is a prerequisite to enter the tenth door– the door to divinity. And, the key to that door is to ‘win over Ego (ahamkara)’, a synonym of ‘celebrating Dussehra’.

Every now and then we have an excuse for being unable to attend satsang. However, when it is about social events we get all the time in the world not just to attend but to do prior preparations as well. Almost every other day we witness some dead body being taken to the cremation ground and yet we blatantly utter about our unceasing responsibilities towards our family members saying, how I can leave everything just like that.  Our situation is more like a crab who neither gets out of the pond nor let others jump out of it. Just in case our kid requests joining along for satsang, we compel him to stay at home and study instead; and with this the never ending cycle of one birth after another continues to spin. To get it done with, we need to be in the company of saints who have made it beyond this cycle. We must surrender to their command or else be ready to keep on rolling like a crab.

Here, we run into two queries often raised by seekers; 1) we have not seen Him yet, resulting in our lack of faith and devotion towards His existence. Sitting in the home country, someone tells us about his/her visit to ‘x’ country, its beauty and what all it has to offer. We instantly begin to dream and hence, plan for our visit to somehow reach that place as soon as possible. And, when Guru offers to have it all sitting right here where we are, why doesn’t that ring the bell? Putting simply, we are showing off in the name of devotion (which is the first step to Sadhana). 2) The lucky ones who could make it across the tenth door were gifted, great men. How can we possibly do that? Our problem is that we are focussing too much on King of demons, Ravana instead of pouring our heart out to the divine Rama. Haven’t we all heard about iron floating with the wood? In that very same manner, there lies a possibility for us to get through. In Ramayana, out of the nine types of devotion, the first one as explained by Lord Rama to Sadhvi Shabri is to keep the company of saints.

Therefore, the real Dussehra celebration lies in forgoing this illusory world of the senses and unknotting the fake thread of attachments storming into ego. The choice is ours –the mud bore or the tenth door. 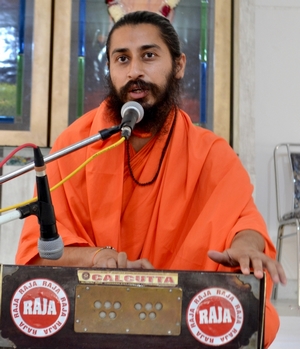 As per Hindu mythology, Lord Rama is known to be an emblem of moral values and decorum. In spite of being the incarnation of God Vishnu, He performed all the duties a common man undertakes. As time would have it, the day He was to be ascended the throne; He was instead exiled to the forest by His father Dashratha, the reigning King. Rama, howsoever the circumstances there might be, i.e. whether a kingdom or a forest to dwell at, was ever ready to embrace any command given to Him by his father, wholeheartedly.  This state of being selfless is called as devotion (shraddha). And, this is what is known to be the foremost principle to be able to do sadhana.

If our devotion lies in worldly affairs, then we’ll get destroyed as this world will have its fate some day. Absolution, the highest truth (parmarth) only means to become limitless, i.e. free from any boundaries. And the leading obstacle is ego. The only way out to get rid of it is by surrendering under Guru’s command. On the other hand, if we claim to have it all going well without living under His umbrella, we are very much mistaken to find any peace or happiness in whatsoever and wheresoever we might be, forget about liberation.

The real, ever-lasting wealth is one and only practice of Guru-mantra. However, riches are what all we can think of, making us corrupted. How? What is this corruption? If something is going on as opposed to what is suppose to happen, it is known as corruption. By ‘what is suppose to happen’, it means – as water will ultimately find its way to another water body, likewise, we, the excerpts of the divine –has to become divine (the Rama). The basic requirement is to get our eyes fixed on our, ‘the goal’. Until the time we do not fall in love with our Guru, we can forget all about sadhana as we surely can’t even live fully.

Seed, who choose to decay in the lap of mother Earth becomes tree someday. Likewise, we are the seeds of the divine. We have to and we must become divine. This is our only religion. Else, in each and every birth, we will have to begin afresh, starting from ‘zero’. He, being the kindest will keep on showering opportunities. It is us who needs to hold on tight and march ahead facing the path leading to Him.

So, let’s probe ourselves that where lies our devotion, the rest of our soul. If it seeks worldly thrills, it’s time to get alert and act upon; sooner the easier.