8 November, Ujjain Engineering College, Indore, Madhya Pradesh: ‘It is true that I am not a scientist but actually I am a Scientist’, said Swami Ji who was recently invited as one of the dignitaries at the  international conference on Frontiers of Physics and Plasma Science. Awakened from a deep slumber, the souls were animated, passions got stirred and actions were inspired making it a memorialized event. To have a taste of it, let’s have a glimpse from the sublime talk (in his own words):

All the laws of nature are already in place. What science does is to reveal them. We explore its principles and laws to create something. Likewise, the three states of matter have been named as solid, liquid and gas. And, now the science has come up with yet another state called as ‘plasma’ which is supposed to be the fourth state of matter. But, is it really a fourth state? It is quite similar to ionized gas. Some electrons have been pushed out of the cycle making it charged and thus gaining the property of conducting electricity. And no surprise, in this whole universe 99% of the matter is in the plasma state. It is beautiful. But don’t you think there is a fifth state also; waiting for us to be revealed. What is that state?

Whatever name you wish, you may choose for it, but do you think that this whole universe is a chaotic arrangement? In this perfect, precise, and a beautiful design everything is working as it ought to be. No one knows since how long it exists and how big is it. All science has come to know is this universe is a small fraction of our galaxy. Who knows how many galaxies are there and how big they are. But what we know for sure is that it is already expanding. So, just imagine; what we know is just a negligible part of this cosmos and that is already expanding. 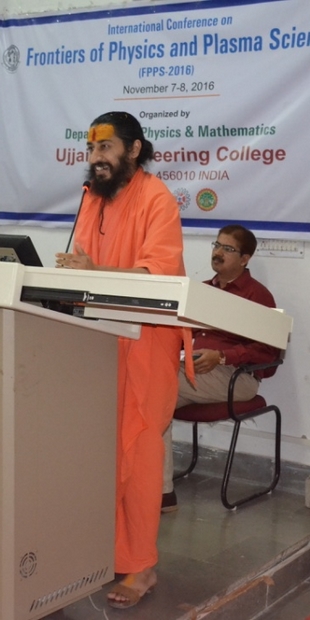 Science started after the big bang, the question is what was there before the big bang, and what made big bang happen? When we don’t know the beginning how can we ever reach the conclusion? When we don’t know about the base how can we ever explore what is this whole expansion about? This is where spirituality comes into the picture, and what spirituality demands. Science also demands the same. Science has come to know since the time of Einstein that every matter is convertible into energy and vice versa. And, this is what spirituality says too that everything is but the divine. Science calls it energy while spirituality calls it divine. How does that make any difference? The very reason for many failures in science is because it assumes there is no God. Forget the word God, you don’t like it, call it anything. But there is something. Do you think you can ever get to know it in the complete? Is it possible? Actually, it is.

It is so very difficult to know about whole but about us, our body; we can know in fact a lot. If we can know about the laws, the principles working in each and every atom of this body, wouldn’t it be much easier to know about every other particle in the universe. And that is what spirituality means– to know ourselves; that we are not just the body. We have to learn that this whole universe is created for the sake of bliss. That is the goal. So the fifth state I am talking about, where the matter has not only abundant energy but also consciousness. It is not a random creation, it is a conscious creation. Everything knows what to do, and how to do. Conscious is built in. And there comes nature in the picture to connect with consciousness.

It is the same consciousness we call as ‘constant’ in our theorems. We can have no theorem in physics without having a constant. Everything is based on that constant. What is a Constant; which always remains as it is. Only if we could take God as a constant, everything was so easy. First, an idea pops up in our mind. Assuming it is possible, we start working on it. So, when we have to assume anyways, why can’t we assume that there is a God? What’s the harm in that? Will we get belittled? If someone was there before us, he is by default older to us. What kind of smart scientists we call ourselves when we are just beating around the bush.

Now, let’s take a day-to-day scenario. A myth –we’ll die if we won’t eat! The truth –has anyone lived forever just because he has been eating well throughout? It is, in fact, this unwanted strain that we put ourselves through makes us weak. We had been conducting experiments where once, around hundred people gathered in one hall. And for seven days, not even a drop of water was served. Gurudev, Mahayogi Buddh Puri Ji Maharaj doesn’t eat for months and it hardly makes any difference. There is a technique to connect with that conscious energy. It knows what to do, how to do, it can match. If we can trap this inner energy, we won’t need food. And how to do that is what spirituality is all about.

So, it is in our hands to buy this idea if we want to reach the depths, and reveal the reality of science. It’s time to take up the call.