Empower your thoughts, and then ACT!

27 May 2018, Shabad Surat Sangam Ashram, Malke, Moga: Before going to bed we often make plans for the following day; plans such as waking up early, spending a few minutes with oneself, practicing Guru-mantra, doing some breathing exercises etc. However most of the times these remain to be just ‘plans’. Why?

Well, during this Satsang-Sabha Sadhvi Ji addressed this very issue. Let us too explore!

A glimpse of the divine message: 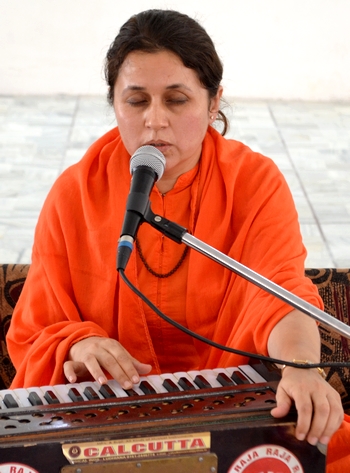 Often our plans remain to be just imaginary and ever postponing plans due to the lack of single-mindedness; we have n number of goals to look forward to. Conversely, for an aspirant of inner divine journey, goal has to be just one; to be one with ‘The One.’ Lets affix one goal and let everything else, every other priority rest under its shade! And to reach at goal point, only necessary and sufficient vehicle is Guru-mantra. It is often asked, what happens of these companions – kaam (lust), krodh (rage), lobh (greed), moh (attachment), ahankar (conceit); these come to rest on their own, just the way darkness hides away with sunrise.

Just be consistent with the contemplation that – 1) I am not this physical body. I am His excerpt (ansha), I am pure, I am Shiva. 2) Whatsoever is going on is for my own good. And even if it isn’t how I wished it to be at the first place, it’s even better; because it’s as per His vision, His plans and His choices made on my behalf – such a thought pattern would gigantically empower us. As of now, it (our mind, and therefore our thought pattern) is multifaceted.

Remember, for those who prioritize Guru’s command over be-it-anything, never gets to face hardships. There are only lessons, which lead one to the shower of divine nectar, i.e. dissolution of tainted part of ego. Practicing Guru-mantra is the biggest and fastest, most powerful vehicle one can have to settle the unsettling mind. Lets get our priorities straight! Lets affix one goal! Let’s act!