16 July 2017, Harisar Ashram, Kila Raipur: It was the occasion of Sankranti, the onset of yet another month known as Sawan as per Nanakshahi Calendar. In spite of the fact that it was just a week post the much-awaited Guru-purnima, a good number of devotees had gathered around to dive in some more of the divine nectar. Delighted to see the enthusiasm, Sadhvi Ji and Swami Ji as always blessed them with their words of wisdom emphasizing on the one but the only most judicial fact, i.e. it’s all about going within. So, let’s get soaked in the divine rain that this month is here to share. Let’s ACT!

A glimpse from Sadhvi Ji’s discourse

As per the Bara Maha path those who are solely dependent on Him, love Guru and his mantra are always happily soaked in the divine nectar, i.e. green inside and outside just like the arrival of rain (sawan) making it lush green all around. And if we are yet not attuned to such a feeling, oh dear, we must begin to contemplate.

We have got just one and not n number of minds. And so, all we need to do is channelize it in right direction. Clinging on to worldly pleasures and then complaining about not being able to move ahead on inner journey isn’t wise. Saying that mind doesn’t stop thence we instead choose to finish up pending day-to-day jobs won’t justify. And then merely spending ten minutes while practicing Guru-mantra also won’t suffice.

This is more like a child refusing to go to school because he doesn’t like it being there. However we understand, it is a must to do. Similarly when we would consistently sit and practice, we would eventually start enjoying, our mind would begin to relax and thus the doors to wisdom will get wide open in due time.

So, why not love Guru? Is it so hard? Since he is the only key to eternal happiness let’s surrender in his lotus feet. Because upon practicing Guru-mantra (simran) and performing service (sewa) even worldly endeavors would bring a sweeter fruit by default, more like a bonus. And dear, remember… it is never ever going to be other way round. So let’s get on with it.

A glimpse from Swami Ji’s discourse 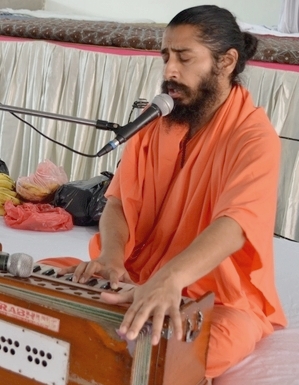 We often say world is changing each moment. No doubt but the question is that are we learning to change; because this is the crux of all the problems. We do not want to embrace changes. We do absolutely no effort to empower our behavior. And when it comes to practicing Guru-mantra, whatever little we do it is for the sake of a long list of desires we carry all along. And so, it doesn’t count.

On top of that we have got some ever-ready excuses; time is not favorable, bad karma is all I have got accumulated, and the most common one is that even He doesn’t listen these days. We must note, ‘He’ is not confined to a human body, as most of us perceive Him to be. That’s an enlightened power, the creator of this self-directed perfect game of Karma around us. Crying over it is merely a clever move of our mind.

And for this, we need Guru and his mantra and, satsanga. Not just to understand the goal of life theoretically but actually to take a step towards it. Until then, sufferings are bound not to cease. There won’t be any happiness whatsoever we might achieve on the name of success. So, the choice is ours.

Summarizing, three sutras for the day; 1) Enthusiastic practice is must. And for that attending satsanga is a key factor. 2) Visit Ashram and do as much as service (sewa) you can, full on energetically. 3) Do not bother about what other person is doing. Just focus on going within.