30 July 2017, Shabad Surati Sangam Ashram, Malke, Moga: With the departure of Swami Ji and Sadhvi Ji for a fortnight visit to Canada, the last Sunday sabha was addressed by Devi Satswra. She being one of the direct disciples of Swami Buddh Puri Ji Maharaj is an example of this divine journey in herself and has been looking after the activities related to Ashram for some time now. Coming from a family who has been connected to this Puri Sect of ours since the time of kambli wale, she has been in the service of her beloved Guru ever since she can remember. She is often heard sharing her words of wisdom from various respectable podiums and today was none different. She talked about His name being the treasure of peace, of eternal happiness. And what’s holding us back en-route our ‘the destination’. Let’s collect some of that!

A glimpse from the divine message 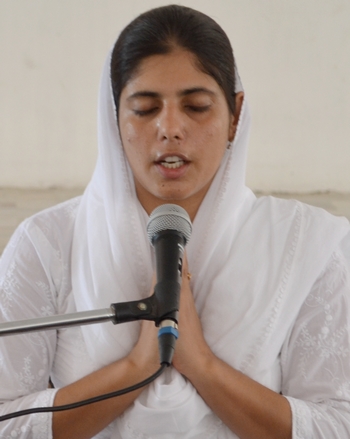 It is commonly said that we do sit for practicing Guru-mantra, attend satsangas regularly and yet mind doesn’t cease to wander. Why, because it is the nature of mind to run after petty desires, and because we are ignorant of the fact that the source of very thing each of us is directly or indirectly in search for, i.e. wealth of eternal peace is actually based within. Reason being the dust of kaam (lust), krodh (rage), lobh (greed), moh (attachment), and ahankar (conceit) having been accumulated over the ages, birth after birth. And until so mind wouldn’t or lets just say cannot turn inwards. For that we must first have a clear conscience past the clouds of ego empowering our lives.

No doubts we do practice Guru-mantra (simran), perform service (sewa), and do Kriya to keep fit but yet conscience doesn’t get clear and mind doesn’t embrace Guru-mantra. So, what to do? Surrender unto Guru’s command. Without that ego would just aggravate. However with acceptance we would keep on thriving on this Guru directed path to eternity. And what would this direction be? One must practice Guru-manta routinely, the only key to progress on this inner divine journey.