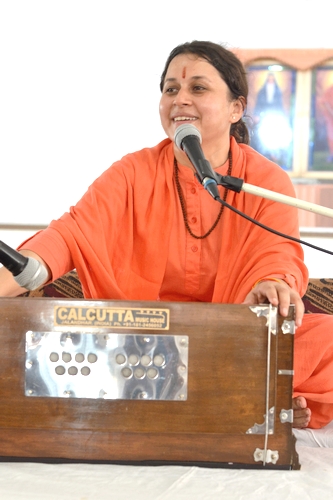 29 August 2021, Shabad Surat Sangam Ashram, Malke: Collective activity was on halt for the last few months; the reason being ‘COVID19’. However, with the revised guidelines, a small get-together of devotees awaiting direct guidance to advance on the path leading to our ultimate destination could take place.

Addressing the Sadhakas in the Satsang Sabha which had been due for a long, Sadhvi Ji brought our attention to rather a fresh viewpoint which got those gathered around to contemplate and is sure to serve as food for thought, for those who are genuinely sincere and watchful of their every single step directing them towards the real goal.

The discourse could be thus summarized – ‘At times, we have a list of n number of small-big tasks to accomplish, which demands a certain investment of our time and energy. With the help of the resources required, we aim to get the desired output. However, does it ever occur that instead of the goal, the focus has rather shifted in accumulating more and more resources; i.e. we forget that why do we have to do this (task/kriya) in the first place? We often say, rather crib that I must start doing some practices – asanas, pranayama, neti, japa, etc. – but instead often end up doing nothing, or giving up sooner or later.

Well, no doubt, there are infinite ways to reach the infinite, i.e. our ‘the ultimate destination’. However, we miss the underline principle. It is not about doing, but about being; i.e. we ought not to do it; just be it. We do not have to do the kriya; we have to focus on what is the aim behind doing that Kriya?

Make an honest observation to differentiate between the two – how and why; and you’ll hit the bull’s eye!’