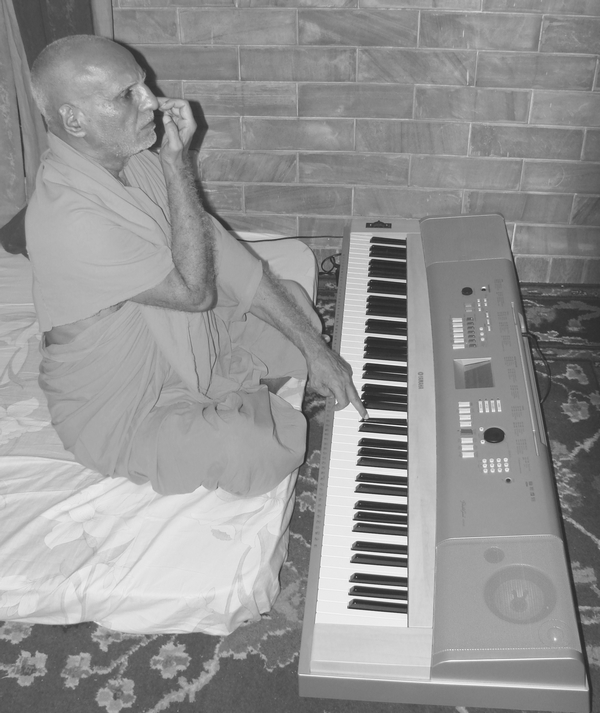 The nuances of this Sadhana can be found only in the unwritten pages. The first question that arises in the minds of even the great musicians is – “Is it possible”?

The answer is unambiguously clear – Yes, it IS possible.

The next question that follows is, “What is its use?” We are content at the heights at which we are. Why seven Octaves? Will a three-octave vocal not please the God, if sung with devotion? We are receiving enough applause for the three octaves that we have mastered. Why waste time and energy on this new unknown territory? Is success guaranteed on mastering it?”

There are three major obstacles on the path of this great Maha–Sadhana:

(i) While the Bhaktas (devotees) and yogis engage in some basic Bhajan Keertana (Devotional singing), they are not familiar with the nuances of music.

(ii) On the other hand, the accomplished musicians neither have knowledge nor interest in Yoga Sadhanas.

(iii) They are alien to the Grand objective that this Maha–Sadhana aims at, or they consider it impossible to accomplish.

Let’s look at it in another way. When a person speaks, the exhaling air invariably exits partially through the mouth as well as the nose. When a person sings, then also the exhaling air exits similarly through the mouth and the nose, but in this case, some portion of the Shwas Vayu (the air used for breathing) causes some subtle movements inside the body also. However, in the Sapta Saptkiya Swara Sadhana, one has to go on opening the path for the introversion of the Shwas Vayu towards the subtle levels of the body. The beauty of this sadhana is that while the Prana Vayu permeates the entire body, the vibrations of Vani fill up not only the gross but the subtle levels too. In the spontaneity of this Sadhana, the physical breathing through the nostrils ceases (however respiration through the body pores continues). On the other hand, the Maha–Sadhaka continues to sing across various octaves – from the lowest to the highest. The Maha–Sadhaka is singing — powerful vibrations of the Shabda, permeating the Mana, manifested up to the minutest cells of the body; every cell of the body brimming with this energy; the Maha–Sadhaka fully conscious and aware even up to the gross levels of the body. Such an exalted state will undoubtedly make the human body pervade the universe and will pave the way further for attaining a “beyond the world” state – an important stop-over in the journey of this Maha–Sadhana.

But, how can this be possible? The doubt still lingers that this is impossible; no one has even conceptualized this Sapta Saptkiya Swara Sadhana.

No Sadhana is actually “new”. All Sadhanas have been existing, always, at all times; dormant as a seed, somewhere in the womb of the Parmeshwari Maha–Shakti, the all-encompassing, all-pervasive power, which manifests it at its own will at the appropriate time.

Without dwelling on the “possible “or “impossible” aspects, we shall delve briefly into how can we put this great Sadhana into practice.

Is there any Sadhana system that can enable anyone to perform and master this Sadhana? Yes, indeed there is such a Sadhana system, shaped and established by years of contemplation and persevering practice, though there is always scope for further innovation and betterment.

It is common knowledge that in Indian Music, there are seven Swaras – Sa Re Ga Ma Pa Dha Ni. One set of these seven Swaras is called a “Saptaka”(Octaves in western terminology). With Sa as the base, the vibration patterns for the remaining six Swaras have been modulated such that these seven Swaras can be compared to the rungs of a perfect ladder- uniformly equidistant. Depending upon the frequency range, the Saptakas can be divided into three broad categories- The Madhyam (Medium) Saptaka ranging from 240 c/s (cycles per second) to 480 c/s; The Taar (high) Saptaka, from 480c/s to 720 c/s; The Mandra (Low) Saptaka, from 240 c/s to 12 c/s. The frequencies of Swaras, upper to lower, have been defined with scientific precision in accordance with the principles of the Creation of nature and that of the human body. The lowest possible Swara “Sa”, the base of the human body and that of the Universe, corresponds to founding energy or power that is manifested in the “Earth” element as the foundation of Creation. Vibrations of the highest possible “Ni” pervade the highest dimension of the Creation- as the ‘Sadashiva’ element in the Universe and as Brahmrandhra or Nadaant tatva in the human body. All other Swaras are established within the range defined by these two Swaras.

Mastery of even Seven Saptakas (Not the Swaras), will lead to the manifestation of Shabdamaya Mana and Pranas through all levels of the body- Gross, Subtle and causal – from Mooladhar to Sahasrar. Moving further, the continued and spontaneous practice of this Sadhana will even accomplish the manifestation of unified Mana and Pranas from the human body to the whole of the universe. Of these, the stretch of the first three Saptakas will lead to the total manifestation of the Shabda in the Gross body; Five Saptakas up to the subtle body; and seven Saptakas up to the Causal body. As per the common belief, Sa is directly connected to Mooladhar Chakra, Re to Svadhishthan, Ga to Manipur, Ma to Anahata Pa to Vishudhi, Dha to Ajna Chakra and Ni to Sahasrar. The number of Saptakas is not limited to only seven. There are many more – in the vastness of Sahasrar on the upper end, and in the Adho Sahasrar (lower Sahasrar– established in the Mooladhar) at the lower end. However, for a simple sincere Sadhaka, the mastery of even Seven Saptakas will be considered adequate to accomplish Universalisation of the conscious awareness. The further thrust required for realizing the source of Mana, may be received through divine grace by such a Maha–Sadhaka from the automatic and spontaneous accomplishment of more Saptakas, below and above the Seven already accomplished.

It will be relevant to mention here that the Sadhana of Seven Saptakas, for attaining realization of the Source of Mana, has to be established essentially on the foundation of the Dhyana Samadhi Sadhana only.

Sapta Saptkiya Maha-Swara Sadhana – The Process and the Results thereof

What is the order for practicing Swara Sadhana?

To begin with, one must ascertain and establish the Grand aim strongly in the pure and pious sight. The Sadhana is to be essentially supported on the strong accessory platform of Seva (selfless service) etc., but Shwas–Shwas Japa continues to occupy the first and foremost place. The only difference here will be that the Shwas Shwas Japa will now be performed in consonance with different Swaras.

It must be ensured that:

(i) Jivhamool (the root of the tongue) is the basic center of Japa.

(ii) Bhroomadhya continues to be the focus of the entire concentration; such that the eyes open fully and completely INWARDS (actually from innermost centers to outwards too).

(iii) Though beginning without Khechri, the Japa should be practiced in Khechri Mudra subsequently.

(iv) As the antarmukhta (inward predominance of consciousness) deepens, the Mantra Uchcharana (chanting, recitation) should be practiced on the mental plane along with verbal chanting in varying scales.

(v) Forge ahead seeking guidance from the most venerated Gurudev and drawing inspiration from your inner self.

For practice purposes, it is essential to use a keyboard with at least five to seven Saptakas, because anything lesser will not be useful for the Sadhaka.

The practice of Swara is now to be done in four different ways:

(i) While exhaling- following the normal order of Swaras

(ii) With both – Inhalation and Exhalation

Now instead of the usual stomach region, the rotation of Nauli will be around the axis of different Swaras arising for the throat region. In such Nauli Kriya, besides the stomach, the chest and the back regions will also rotate and revolve like Nauli itself. The body will experience a pleasant and forceful storm of Prana and the Swaras.

Now increase the expanse of Swaras, gradually. Beginning with three Saptakas, extend it gradually with an increase or decrease of one note at a time. The journey beyond three Saptakas is arduous- akin to breaking open the doors of an ancient castle, containing invaluable treasures, but closed for ages past. However, the Sadhaka is equipped with the power of Shabda Swaras brimming with Prana Shakti, enough to break open the adamantine walls. It may appear impenetrable at some point of time, with a dark zone ahead seemingly unreachable by Mana, Swara, or even Prana. The force exerted may appear to be damaging Sadhaka’s throat. However, all these afflictions notwithstanding, it IS possible to penetrate that impenetrable door. Only the human body has the unique ability to manifest through it and within it, the grandeur of the Supreme Consciousness. The Swarabhyas – Practice of Swaras – performed with meticulous devotion and sincerity is bound to bestow the Sadhaka with coveted success.

When the Sushumna Path is cleared and opened, from Mooladhar to Sahasrar, through the awakening of Kundalini, then the diapasons of Swaras from all the seven Saptakas will move upwards. That will be the time when all the Sensory orifices will open into the Sushumna Path. The Naadas will permeate from Sushumna to the gross body on one side and from Gross to Sushumna on the other. Anahad Naadas would have awakened much before the accomplishment of this stage. Now the gross body will attain a state of sublime brilliance, full of vibrations, permeated with Swaramaya Mana, Anhad Naadmaya Prana.

In this exalted state, the Mahayogi will sing in different Ragas, that is, a definite set of Swaras with two centers. Those coveted Rasas (Karun, Virah, Veer, Shringar, etc.) will be awakened, in their purest spontaneity. The bhavas thus arising will be of the purest and most natural form. When the Sadhaka sings with Mooladhar or some other Chakra as the center of the ascendance of Vadi Swara (the most important Swara), and with the Samvadi Swara (the second most important Swara) centered around a complementary chakra, then those centers will be inundated with Rasa–Bhavas, soaking the entire body with corresponding bhavas. These Rasas will be instrumental in the transformation of the body. Ultimately the Sadhaka will attain complete unification with these Bhavas, along with Mana, Prana, and the gross body, and pervading the universe, will successfully explore the Origin, the root of their own Mana. Then will be performed the divine dance of the playful supreme consciousness, centered on the Mahayogi’s human body- the focus of this grand blissful play-field.