Swami Ji’s life style is really an amazing one. Generally he stays in seclusion but for the last Sunday of every month when he gives a little brake to his hectic schedule for few hours and entertains the visitors and seekers. All other days he spends almost whole of the day under Sun practicing SSKY and rest of the time he stays locked in his room practicing and experimenting unending techniques of Yoga (not in general terms of mere asana and pranayama as most of the people would interpret even in east nowadays) and developing new ones suitable to the need of common man. Every time he discovers something new he would tell to the first practitioner he meets and then to all in due course. The secret most techniques like Khechari, Dhar Nauli, Amroli, Shambhavi, Kriya Kundalini, Naadanusandhan with Seven Octave Singing and many more are well known to most of his disciples and they are practicing them too. Few so-called educated people object on this sometimes telling that why doesn’t he keeps such a precious knowledge with himself as the very importance of such wonderful practices diminishes only to hear him burst in laughter. He says, “I am but a public servant employed by the highest government and my duty is to improvise and alter the fitment to suit the needy so that they may also make use as much as they could. How could I possibly refrain myself when I already see the ignorance and confusion amongst people just because this knowledge had been left confined to chosen few in old days? After all one has to try millions before getting the precious stone but trial is important even then.” 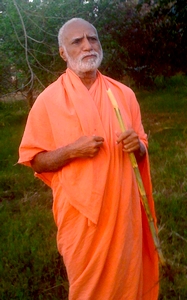 There had been significant changes in Swami Ji’s eating habits. As he progressed on the path his diet reduced gradually. Initially he used to take 2 meals a day then he came to just one meal a day, later he stopped solid diet and shifted to milk and lassi (buttermilk). While in practice, sometimes he discards milk and stays on plain water for long time and sometimes he abandons even the water for as long as he pleases. Though, while on tour he used to eat a little when forced by some very loving devotee but even then his body neither required nor enjoyed food anymore. It rather made him uneasy but for sake of innocent followers who were not much aware of the Yogic practices he accepted food offerings too once in a while. A time came when he fully stopped eating. Now he has stopped eating completely, he doesn’t take even fruits or milk et al. He does take water at times and even enjoys chewing tulsi or neem leaves sometimes. But surprisingly when somebody asks for leaving food or changing to liquid diet in general he doesn’t allow unless that person is a sincere practitioner and decides to enter the cell but even then the diest is controlled only for as long as he stays in there. He says, “Leaving food is not the objective but a mean to accelerate the practice and in fact it is going to happen one day or the other at an advanced stage when body would find and relate to the inner source of energy. So one should patiently and sincerely practice and wait for the inner call. Food isn’t our enemy but the craving for that is so we need to renounce this craving not the food itself which in fact is quite important for a beginner.” Quoting from various saints and scriptures as well as from his personal experience he condemns the fasting or starving but supports the balanced diet. “Not just diet but each and every action and behavior need to be in complete harmony with the divine rule so that it saves us from any turmoil whatsoever and keeps us on path.” He says. 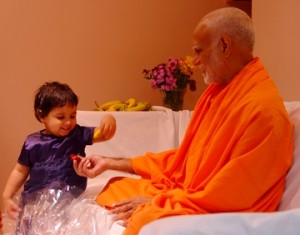 Swami Ji is a man of both extremes. He enjoys traveling in general class equally as in a saloon especially hired by some devotee for His comfort. He tests hunger as well as over eating at times. Let the matter be most serious he would find humor in that and even in a cheap news paper joke he will figure out such a high teaching that even the author will not have dreamt of. Let that be play with kids or talks with any aristocrat he is always at his naturally best. He enjoys people noting and pointing such contradictions to which he responds, “Yoga is the art to go beyond any contradiction even that of birth and death.”

As a young lad even before he could understand spirituality or the divine goal, he happen to read books of a great prophet Swami Ramananda who was guru of his father. The books discussing the eternal issues such as reason of the creation and the goal of this universe, the next possible step in evolution, the Siddhas and their nature, the dawning of Satyug and alike. Quite a heavy reading for his tender age that too during holidays but as people say, genius are always born and not created . So reading became an important part of his life. Ramayana, Mahabharatha, Geeta, Bhagwat and Purans were his all time favorite but he never missed any book fallen in his hand if ti was related to some general topic too. Always an active member of library and an enthusiastic reader he was to read Swami Vivekananda, Sri Arvind, Theosophy and all the available books on occult and spirituality. This helped him in deepening his aloofness and shape up his life. Arranged by divine providence his master was a great scholar who taught him Vedas and various old scriptures and also the divine language Sanskrit while he was in service. It was there he realized that no manual help could possibly pacify the great suffering of this world, as whatever help offered is temporary while the sorrow is ever growing. And this was confirmed from his early experiences of worldly life while studying or serving at college. 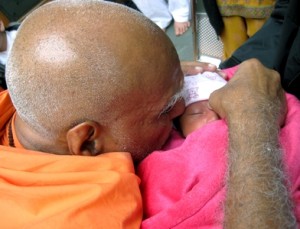 Moreover, a clear discrimination is important as to what the needy deserve because without this discrimination any help would go in vain. The only possibility is to make people realize and understand that they have to help themselves and the best medium for this he considered was literature. As he found in Vedas and other many scriptures that every minute detail of life is mentioned in them but none can grasp them at once, everyone get and receive as per their eligibility, a perfect discrimination. But in changing world people unaware and unworthy of Vedic knowledge are translating those scriptures imposing their own notions and conception over them with no ground reality or practicality to rather misguide the common man. Thus he decided to put his own experiences and experiments down on paper in a simple and practical language and also provide practical guidance to aspirants.

Things were promising and his idea was well accepted but still he found to his dismay that people were lacking the determination and zeal, also they were unable to carry on with teachings back home. They all wanted some miracle to reform their life and lo for their weak soul one was discovered. SSKYoga as it is called in short is indeed a miraculous boon for suffering world. It was brought to general public in year 2003 and since then thousands of people have recovered from disease as severe as heart blockage, skin cancer, paralysis, leprosy, asthma, depression and many more such as weak eyes, migraine, sinusitis, allergies, indigestion, insomnia, menstrual disorder etc. And for people with sound body and true seeking spiritual experiences of divine sound and light were made easier and permanent. Considering the inability of people in doing difficult asanas or practices and the inefficient or inconsistent healing effect they offered, Swami Ji choose this flexible and easiest way of healing instead, which does much more than healing the physical body and heals the mind and soul too. This sadhana is the fruit of his 30 years of experiments and research. The pain and time invested has paid off pretty well and has brought a ray of hope to the suffering of this world. Thus Swami ji has decided to spread this sadhna as much to the use of the people worldwide as possible and is preparing his disciples to carry on this task.