Swami Meva Puri Ji was associated with the Dashnami Sanyas sect established by Adi Shankaracharya. At that time, the main Ashram of this sect was located at Village Ladana (now in District Kaithal, Haryana). Swami Tota Puri Ji, the sage who conferred Nirvikalpa Samadhi Deeksha to Ramkrishna Paramhansa, also belonged to this ashram.

Swami Meva Puri Ji lived a very devout life, mostly in seclusion. He had decided beforehand that he shall renounce his body by attaining Jal Samadhi at a specific time in the river Ganges. During those days one had to walk due to lack of modes of transport. Plus Ganges being far away, about 240 km from ashram Nanduana (at village Raipur, District Ludhiana), and also His body being at the age of about 109 years, people started doubting His intentions. He replied that ‘if one cannot have any control over one’s death then what is the worth of attaining sainthood (that aims to have full control over one’s body-mind-soul or life in totality)’. He then walked to Haridwar at the declared time accompanied by His followers, including His most revered disciple – Swami Dev Puri Ji (fondly known as Kali Kambliwale Maharaj). It was the time of the Kumbha festival in Haridwar, after which He voluntarily took Samadhi in the Holy Ganges – alive and fully conscious. It is important to clarify that He had taken Jal Samadhi and had not abandoned His gross body out of any compulsion. To establish this He re-appeared after three days to fulfill some specific task, which has been described in detail in Part I of the Book titled ‘Gurudev Charitawali’ published by Ashram. 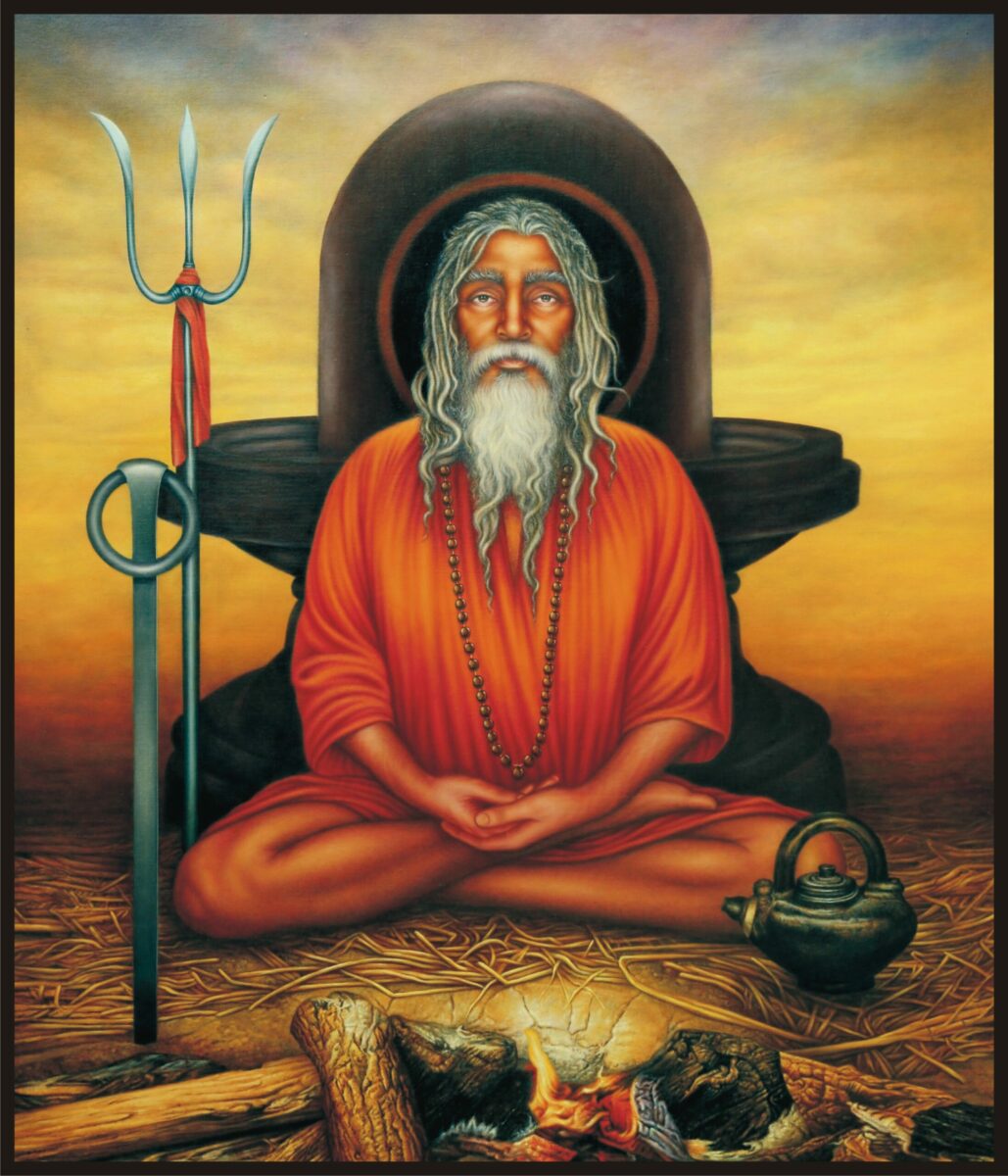 Swami Dev Puri Ji was the exalted Disciple of Swami Meva Puri Ji who undertook rigorous Tapa that lasted for seven long years, without any arrangements for food-water, means of protection from summers-rains-winters, etc. Throughout these seven years, he was clad with a piece of black cloth or shawl (Kambli) and subsequently became famous as Kali Kambliwale. During this period, white ants had made His body their home; rats had bitten His foot fingers, and even snakes would run over His body following the rats. However, Dev Ji remained engrossed in his sadhana; as freedom he had attained from the bondage of the physical body.

Such rigorous Tapa resulted in a divine declaration from the space heard within, exhorting him to set out for the welfare of the world since he had consummated his task. Initially, He ignored that voice. However, on repeated pronouncement, He shared with Gurudev Swami Meva Puri Ji, who further advised him to keep on ignoring that voice, and to continue with his Sadhana since his aim was not to secure salvation for himself but to relieve the masses at large from misery, transforming his body into an instrument of the divine, manifesting the ultimate (shiva–shakti) in his gross body itself.

With such arduous Sadhana, the essence of Shastras revealed itself to Him; all Siddhis (miraculous powers) manifested themselves in His body; His heart drenched with the nectar emanating from all Sadhnas. Every pore of his body percolated with the Triveni of Bhakti (Devotion), Jnana (the ultimate Knowledge), and Yoga (union with the Supreme Consciousness). Eventually, thousands of devotees benefitted themselves by taking a plunge in this great confluence.

Swami Dayalu Puri Ji came in contact with Gurudev Swami Dev Puri Ji at a tender age. Upon reading the forehead in a flash, Prabhu Kambliwale declared that He (the child who later became renowned by the name of Swami Dayalu Puri) was a Mahapandit (a great scholar) in His previous birth. As such He was sent to Kaashi for further studies.

Swami Dayalu Puri Ji was the epitome of Jnana (wisdom). In deference to the command of Gurudev Kambliwale, He dedicated His entire life to studying as well as teaching. The knowledge of scriptures that He had was not merely bookish, but His whole life and behavior reflected the same. Though He kept visiting Harisar Ashram every now and then but most of His time was spent in Kaashi. Varanasi’s Kashidevi Matha and Kankhal’s Haribharati Vidyalaya received special affection from Him. The lucid style of His teachings, and the clarity and depth of His knowledge attracted many seeker students from far and wide, to study. Having a storehouse of in-depth knowledge, He never refused to teach anyone, even if it meant taking eight lectures a day. The strain on His eyes kept on increasing so much so that ultimately His eyesight dwindled, turning Him almost blind. He had to quit teaching. Many of the students taught by Him adorned the exalted positions of Mahamandaleshwara, Mathadhish, Shankaracharya, etc.

This lineage of the Puri sub-sect of Dashnami Sanyas sect established by Adi Shankaracharya starts with Swami Saraswati Puri Ji of Baluwatta (Patiala District). The second was Swami Raj Puri Ji of village Ladana, the third was Swami Bhandar Puri Ji and the fourth was Swami Baan Puri Ji. The fifth, Swami Amar Puri Ji set up his tenement at Nanduana village of Kila Raipur District. The sixth of this order was Swami Mewa Puri Ji who has taken ‘Jal Samadhi’ i.e. He entered the river Ganges consciously to leave His gross body. And after few days, He had reappeared on request of his dearest disciple Dev to accept a due gift. Swami Dev Puri Ji, famed as Sant Kali Kambliwale, was the seventh Yogeshwara of the Puri Order. Next was Swami Dayalu Puri Ji, an unparalleled scholar and a renowned teacher of his time.

Swami Buddh Puri Ji Maharaj being the ninth in the lineage of the edifying messengers, is looked upon as the dispeller of the mist of ignorance in this world of chaos and turmoil. The whole form of spiritual therapy; His enduring contribution is to open the window of conditioned mind to visualize the sky of freedom and infinity. The means He chooses is mostly by pen, but sometimes He does reach out and directly addresses the aspirants giving them all the freedom to ask questions just to clear their long-accumulated doubts and confusions. While staying in total seclusion all by Himself, at times, He does entertain true seekers and thus, earnestly shares His experiences.