Gurudev Swami Buddh Puri Ji (fondly known as Maharaj Ji) is associated with the Puri sect of Dashnami Sanyas established by Adi Shankaracharya, and is acknowledged both nationally and internationally for bringing a scientific-practical outlook to spirituality.

Living in the Himalayas i.e. in total seclusion all by Himself, occasionally He does entertain true seekers giving them all the freedom to ask questions just to clear their long-accumulated doubts and confusions, while earnestly sharing His own experiences.

To explore a bit more of His personality, let’s have a brief look…

Before coming to the Ashram | At Master’s Feet | Journey thereon

Serving the masses | His Lifestyle | Sadhana Innovations | Back to the Himalayas

Before coming to the Ashram

He descended on the holy lands of Punjab in 1947. Being an obedient child, very observant and sincere student, He excelled at it all – be it Academics, Football or Badminton, Lectures or Seminars, Projects or Researches. Upon completing His M. Tech. in 1972 from I.I.T. Delhi, He took up a job as a lecturer at Motilal Nehru Engineering College, Allahabad for a short period to earn enough to repay the loans taken for His education.

Inclined towards the philosophy of Theosophical Society, and that of Sri Aurobindo, His Vision was: “Just eating, sleeping, reproducing and finally leaving the body to decay cannot be the purpose of such a beautiful life. It has to be something much bigger!” He was sure that “if our saints and sages renounced this world and worldly pleasures then there must be something greater they were looking for.” And thus, He did the same!

His inner craving was channelized by His Holiness Swami Dayalu Puri Ji Maharaj; initiated in Mahayoga by whom, gave wings to be Swami Buddh Puri Ji’s spiritual journey. For nine long years, He served His master, working in ashram day and night, ignoring all His bodily needs, and leaving no room for personal wishes or thoughts.

Maharaj Ji had the opportunity to learn the Sanskrit language and many more scriptures (Vedas-Upanishads, etc.) directly from Gurudev Swami Dayalu Puri Ji Maharaj – the topmost authority of the subject at the time, an eminent man of letters, and someone who was equally renowned for His spiritual brilliance amongst all the scholars, saints, and sages.

Since contemplation and meditation were deep-rooted in His nature, over the time, Maharaj Ji’s experiments with all the aspects of Yoga such as Karma, Jnana, Bhakti, etc. plus the craving and the practices intensified, which purified His mind thoroughly leading to one of His meditations that brought the first, definitive, direct experience of the Divine (Samadhi).

In 1983, post Gurudev Swami Dayalu Puri Ji Maharaj’s Mahanirvana, He set voyage to an unknown destination according foremost importance to Sadhana, continuing the tradition of Mahayoga Lineage. Traveling mostly on feet with no possession or money to support Him, He had a tough but adventurous journey. For more than 10 years, engrossed in Sadhana, He continued contemplating in the far-flung caves of the Himalayas, and experimented with varied popular and secret methodologies. His quest and exploration continued uninterrupted even in the harsh winters of the Badrinath area, with sub-zero temperatures, and with 8-10 feet thick layer of snow which cuts off the region, closing all roads.

Persisting in His research of the inner path, He got the inspiration that this was not all; the goal was rather to manifest the Divine to the material plane of existence and not merely confined to His experience in Samadhi. Thus the Divine itself would manifest to thrust the process of evolution. The practitioner himself would be completely merged into the Divine to an extent that the Divine will shine in this very physical body. This is the ultimate goal known as Mahayoga and an advanced practitioner of this path can be termed as Mahayogi. This path has so far brought Him victory over not only diseases or fatigue but even hunger, thirst, and sleep and the journey is still on…

In the year 1994, when He was in Badrinath, He was approached by some aspirants to set up an ashram (which was later named as ‘Shabad Surat Sangam Ashram‘) in their village (Malke in Punjab) and thus, guide them on the path of Ultimate Truth with the experiences and the vast ocean of knowledge that He carries within. Considering their sincerity and dedication Maharaj Ji accepted the proposal with one condition that he would take care of just the spiritual part of the ashram. While providing spiritual guidance and aids to the seekers, He mostly remained confined to His cell researching the infinite ways of reaching the Infinite.

Sadhana Camps were organized regularly in this Ashram, and not just in various cities and villages, but also internationally (in Canada, England, Greece), and in difficult terrains and glacier areas like Tapovan, Satopanth, Muktinath, etc. 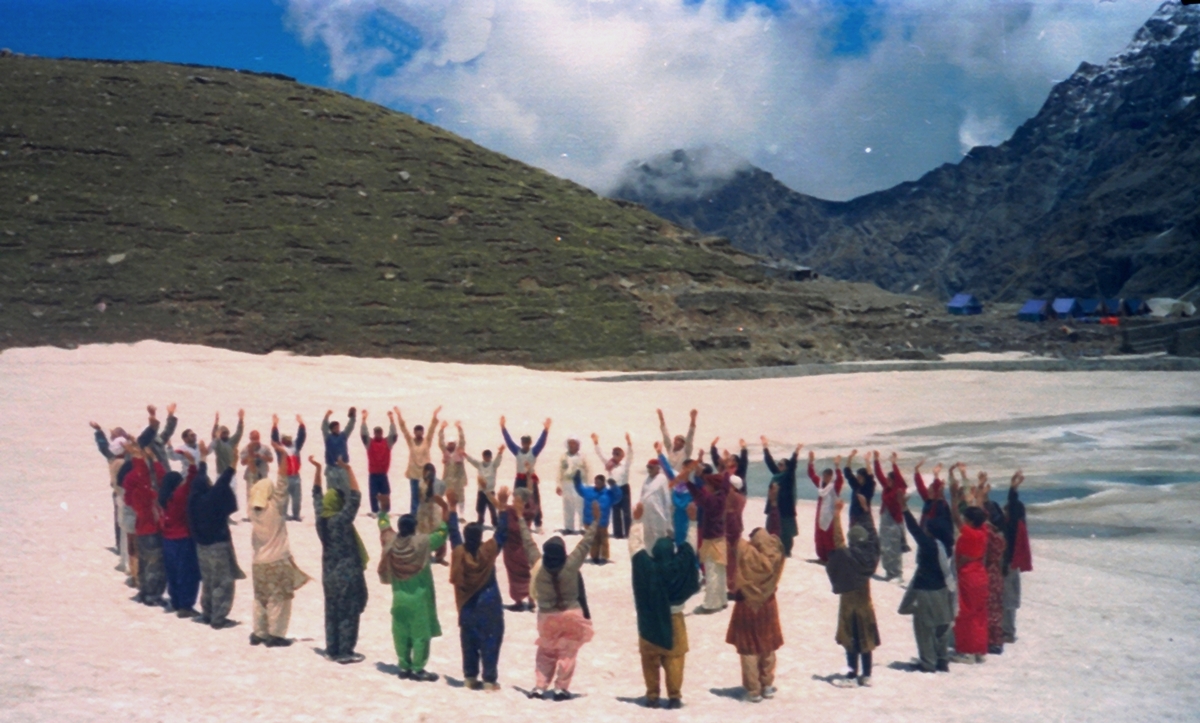 Few so-called educated people object to this sometimes telling Him why doesn’t He keeps such a precious knowledge with Himself as the very importance of such wonderful practices diminishes, only to Hear him burst into laughter. He says, “I am but a public servant employed by the highest government, and my duty is to improvise and alter the fitment to suit the needy so that they may also make use of it as much as they could. How could I possibly refrain myself when I already see the ignorance and confusion amongst people just because this knowledge had been left confined to a chosen few in old days? After all one has to try millions before getting the precious stone but the trial is important even then.”

Long rigorous contemplation and practice did bring Him some clues directing towards Mission Immortality but after all, He had to make them real for one and all. He was already practicing an integrated form of Yoga which consisted of varied streams such as Raj, Gyan, Bhakti, Karma, and of course Kriya. God’s grace combined with earnest practice and research helped Him decode the mysterious and ambiguous quotes of Gorakhnath, Gyaneshwar, Charandas, Ramalingam, and many other Siddhas (prophets and adepts) successfully, as much for Himself as for all sincere seekers. But the question was still burning – “Wasn’t there any real tool which could suit all, and help them to start and thus progress right from their level?”

Keeping in view the prevailing circumstances, with many fallacies being spread in the name of spirituality and religion, Maharaj Ji, after deep analysis and research of various esoteric Sadhanas, has developed Sadhana systems, which can be followed easily by all. “Siddhamrit Surya Kriya Yoga” came into the picture in the year 2002, the fruit of His thirty years of experiments and practice. A systematic approach to superhuman hood distinctively divided into seven steps was developed in the next year to suit every individual at their level. Many more innovative practices were delivered in later times such as Agni Kriya, Sanjivani Kriya, Swar-Naad Kriya, etc. Many obsolete esoteric practices such as Dhar Nauli, Khechari, Shambhawi, Kriya Kundalini, etc. were also revived.

He has also written more than twenty Sadhana-related books which can benefit the initial seekers as well as accomplished Sadhakas, as per their requirement, level and understanding.

Under His guidance, a magnificent and divine Dhyana Mandir Tripura Shiva Peetham was built at Shabad Surat Sangam Ashram. It’s an endeavor to give a boost to the spiritual aspiration of one and all, as it envisages to become a playground of the divine power “Tripura Sundari Shiva” Herself.

Then on the day of the grand opening ceremony, i.e. 3rd October 2014 that witnessed the gathering of more than 20,000 people from all across the world, Maharaj Ji nominated (traditionally by giving shawl and rudraksha rosary to) His main disciple duo— Swami Suryendu Puri, and Sadhvi Yoganjali Chaitanya Puri — in charge of the ashram tradition, administration, activities, and initiation, etc. and dedicated himself to the highest goal of Mahayoga.

And yet again, He left for Himalayas! 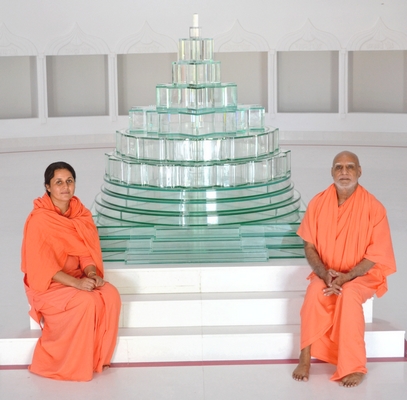 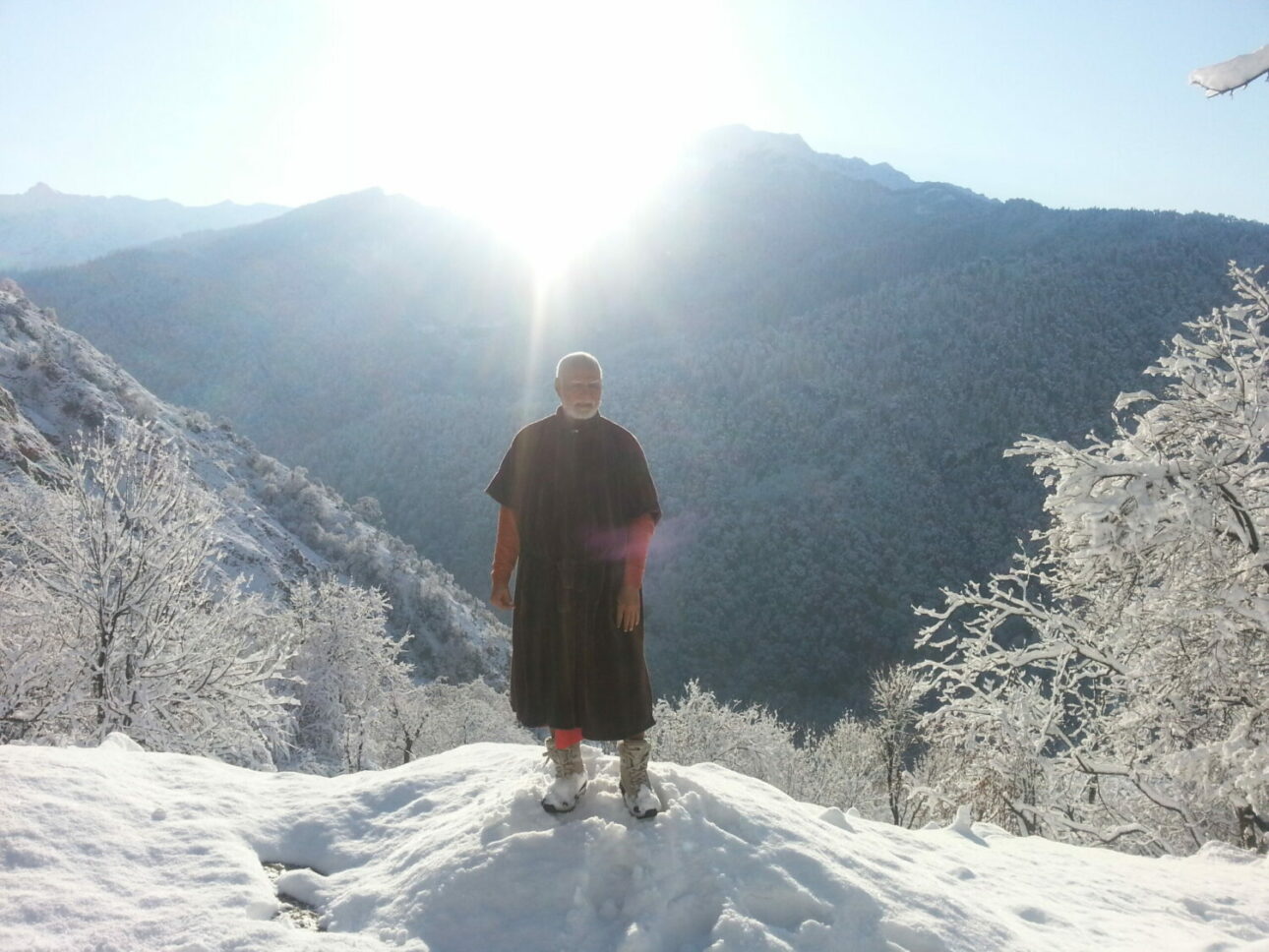