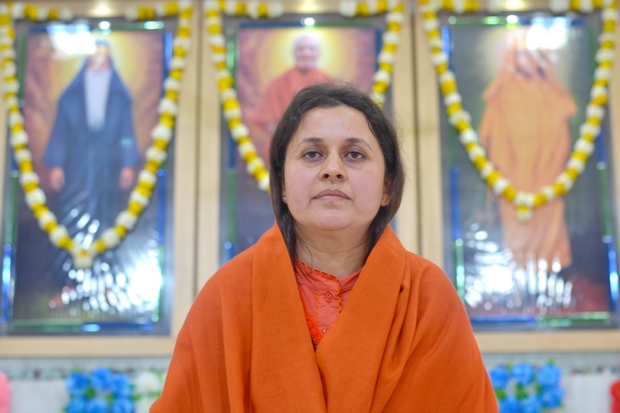 Sadhvi Ji’s life is a living example of love and devotion towards the master and the path. She was born and brought up in a very simple but sincerely devout family of Punjab. Though her family was set up in a small village, her father worked for the Indian army, therefore every time he visited home there were countless experiences and stories in his bag to be shared with the family in addition to gifts & souvenirs from all corners of the country. She being the youngest of all the children, was loved most. She was always a bright student and a keen observer but this did not bring her any solace as her observations raised many questions to trouble her innocent mind. And none could answer all her queries so she was told by her mother to seek the help of the divine. Her innocence made her believe that the divine will solve all her queries and show her true light. And lo, it happened!

She was still in school when Bhagat Jagat Singh Ji (the major inspiration behind setting up Ashram in village Malke) visited her village. A living incarnation of Dharma as he was, he guided all the people in living a life of righteousness. When her mother told about him, she liked his teachings but all of her queries about God and His creation were not answered yet. Then one day, when she came back from school her mother was getting ready for Satsang. She also joined her so that she could find direct answers to her queries. But on reaching there, she found a sannyasin sitting next to Bhagat Ji. It was her first encounter with a Hindi speaking sadhu. A student of 6th standard who had barely learned to frame proper sentences in Punjabi felt at home with his Hindi jeweled with Sanskrit quotes from scriptures. Mesmerized as she was, she could not turn her face away from him. This sannyasin was none other than Swami Buddha Puri Ji Maharaj. Recalling that day she says, “When the Satsang was over and Maharaj Ji was leaving the stage he had a fleeting look over me but my heart was seized by that slight glance. In that fraction of second, I felt as if my heart had thawed out and was rushing towards him. This surging sensation became an intimate part of my being since then.”

Thereafter, there were noticeable changes in her lifestyle. She took more interest in scriptures and writings of saints than in school books; she was happier at Satsang and spiritual gathering than with her friends or at a social gathering. Passing time only helped intensify this craving and she could not stop herself from committing completely to this mission. While continuing her worldly education, she studied Upanishads, Vedanta, various texts on Yoga and Bhakti, and on top of all the divine language, Sanskrit directly from Maharaj Ji. Her sincerity and devotions were proven when she was asked to teach these subjects to all others. But she did not limit herself only to intellectual business but regressively practiced different methods of yoga.

She had accompanied Maharaj Ji in most of his mountain retreats including Satopanth, Tapovan, and Muktinath before being formally initiated as a Brahmacharni in the year 2006. Since then she was responsible for all the household affairs of the ashram in addition to conducting yoga camps and workshops worldwide.

Then in 2014, post the inauguration of “Tripur Shiva Peetham” and Prana Pratishtha of Shree Yantra (the magnificent actualization of the divine plan for the benefit of seekers), when Gurudev Swami Buddh Puri Ji decided to reside mostly in the higher reaches of Himalayas, utilizing most of his time engrossed in still deeper contemplation, devising ways to make esoteric sadhanas easily accessible to the seeker disciples (in accordance with their respective spiritual levels), he passed on the responsibilities of the Ashram -including the onerous Seva (service) of propagating the Sadhna streams of the exalted lineage- to eminent disciples Swami Suryendu Puri Ji and Sadhvi Yoganjali Chaitanya Puri Ji, who are already progressing on this path under the kind guidance of Sri Maharaj Ji.