Swami Ji, born and brought up in a pious middle class family of Northern India, started as a quiet and introverted person. Nonetheless, these times were mingled with a dream of bringing happiness and prosperity to the world. Post his graduation in science he worked as a Programmer Analyst in Bangalore.  The shy and timid person here gave way to a dynamic and influential one and soon he found himself the master of all worldly luxury. However, coming to know of these experiences as a mere repetition that brought nothing new he frantically searched for a path to lasting happiness and purpose. Meandering through seeking-experiences with noted authorities from diverse fields he finally landed a firm ground with Swami Buddhpuri Ji – a prolific researcher of the inner sciences, an ex-IITian and a representative of a rich spiritual lineage of the present times. And since then Swami Ji has wholeheartedly thrown himself into the path, which he deems as a sure way to lasting strength, energy and happiness.

The richness and clarity of Swami Ji’s inner life is reflected in his remarkable traits as a masterful orator, a cogent debater, and a loving counselor to all. He spends his time researching the inner path in the guidance of his Master, a unique yogi who has banished the needs for external sustenance and more, and also spreading his findings amongst all. In this capacity he is presently involved as the primary researcher into the project of Mission Immortality – a grand initiative that aims at unraveling the potential of man in its totality. Swamiji has conducted several camps, workshops and seminars in various parts of India and also Canada. He has personally trained thousands of people in Siddhamrita Surya Kriya Yoga (SSKYoga)- a renaissance of the powerful practice of the Vedic seers for complete well being of man at levels: physical, mental and spiritual.

Swamiji at one of the SSKYoga camps 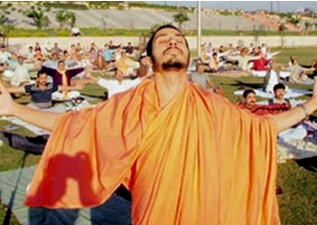