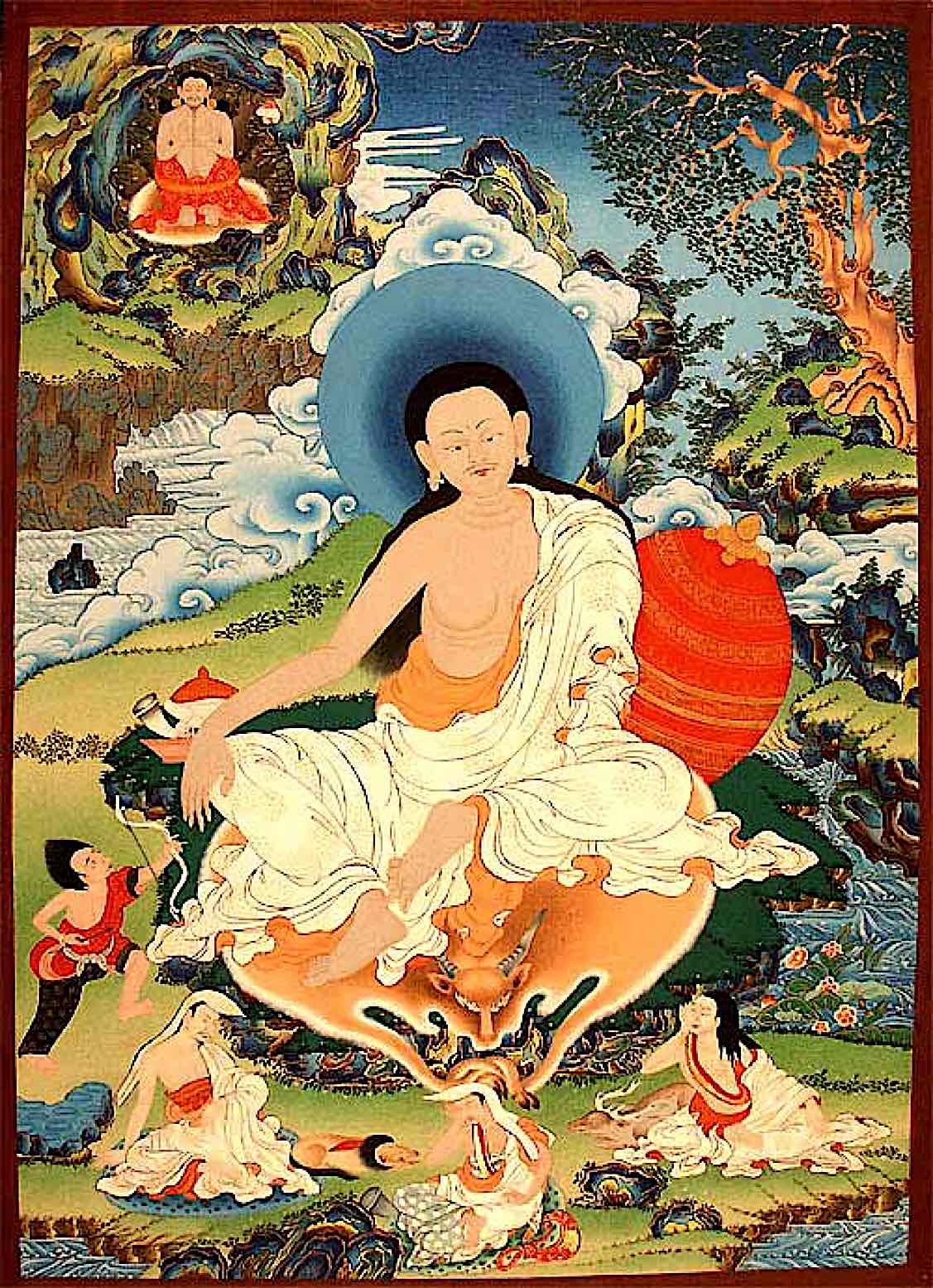 Tibet – the highest plateau of the world and the land of snows! Its snow-capped peaks, forests and caverns invited some of the most remarkable men from India who sowed into its bosom the seed of spiritual knowledge. Having a yearning like a dazzling fire and the strength of the steadfast Himalayas, the hearts of various Tibetans became fertile grounds for the spiritual seed to ripen. Here the spiritual tree grew in an environment of gushing snowy winds, of forests laden with sky-high pines and of peaceful caverns quite distant from the struggles of worldly afflictions and desires. The spiritual knowledge of the Masters found full maturity here. There was once a time when a mere mention of this land would cause a thrill to run down the spine of any aspirant. And today, the secrets protected in the bosom of Tibet are, in accord with the Divine will, are being widely proliferated across the world.

Amongst the grand masters of Tibet, Milarepa is the name which contains in itself the mysterious and thrilling memories of the deepest practices of spirituality. For sincere aspirants, this name is an unparalleled reservoir of inspiration. The great scholar of the 19th century, Gopinath Kaviraja says that Milarepa’s sadhana draws a picture of an ascent where a lowly being reached the highest state of deathlessness in one lifetime. This story describes how a shrub laden with thorns evolved to a wish-fulfilling divine tree. It describes a child, who being surrounded in the most adverse of circumstances managed to attain the state of a deathless body.

While reading Milarepa’s life’s story one cannot help but wonder, if it is really a true account or a narrative of sensational imagination. But, without a doubt, it is a true story of an explorer of Truth, who is travelling on the highest path of its revelation. To be led into believing it to be a work of fiction is no surprise, because, it is not easy for the modern intellectual mind to comprehend the events that lie beyond the realms of mind and speech. However, the aim of any inquisitive reader of Milarepa’s biography should be to try and unravel the science which is at work behind the seemingly miraculous events associated with the protagonist of this story. Reading his life without giving due attention to the mysteries of his sadhana would undoubtedly give an impression of reading a fictional work. In fact, such an impression, if formed, only points towards the rarity and mysteriousness of the deep practices of spirituality.

Milarepa is a true occurrence in the history of Tibet. The year 1052 is unforgettable for entire Tibet, when in Kyanga-Tsa, a child took birth who went on to secure his place in the firmament of the greatest masters that have descended upon Earth or will do so in the future. The same place that is granted to Nanak Deva in Punjab, to Chaitanya Mahaprabhu in Bengal and to Gyaneshwara Maharaja in Maharashtra, is granted to Milarepa in Tibet. Milarepa was not only a yogi but a poet as well. Many events and teachings regarding his sadhana were put into verse by him. An example follows which bear testimony to the great heights of spiritual endeavor that this remarkable saint ascended to:

“I was practicing on the slopes of Lachi Kang

When the earth and the heavens united

And sent to me their messengers – a storm.

Taking the sun and the moon as their captive

The little stars disappeared in the sky

And the big ones were enveloped in the fog.

For nine days and nights it snowed continuously –

As if large birds were falling with the speed of air

And at all times, snow-flakes like peas were falling

The peaks were all enveloped in the snow.

Below, the summits of the alpine trees were all turned white

The lakes had turned into a large mass of snow

White were the mountains and white was the earth.

Down in the village, men had been confined to their homes

The birds were facing starvation.

A war was on between the blizzard and

The thin cotton-cloth that lay over my body.

The snow that fell on my body, melted

And flowed down as streams of water.

Below the thin cotton-cloth a furnace was ablaze

The war was on between death and life

And in the end,

This verse sings the glory of the accomplishment of the practice of Ṭummo into which Milarepa had been initiated by his Guru Marpa. The event highlighted in this verse is a torchbearer which lights the path of a serious aspirant and protects them from groping in the darkness of mistaking asiddhi (non-accomplishment) for siddhi (accomplishment). Milarepa’s existence upon the Earth reflects with such lucidness and effulgence, the Descent of the Divine inside the body of a True Yogi. His following words are a gushing source of inspiration for any honest aspirant who seeks nothing less than Perfection: “Maintain the state of un-distractedness and distractions will fly off. Dwell alone and you shall find a friend. Take the lowest place and you shall reach the highest. Hasten slowly and you will soon arrive. Renounce all worldly goals and you shall reach the highest goal.”